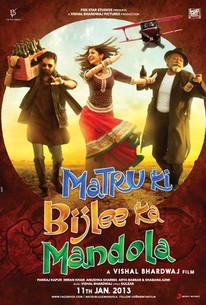 Set in the rustic surroundings of a village in Haryana in India, "Matru ki Bijlee ka Mandola" is a comedy-drama about Harry Mandola (PANKAJ KAPUR), a wealthy industrialist who loves his drink, his daughter Bijlee (ANUSHKA SHARMA) and the unusual bond they both share with Harry's man friday, Matru (IMRAN KHAN). Much to her father's delight, Bijlee is all set to marry Baadal (ARYA BABBAR), the son of a powerful politician Chaudhari Devi (SHABANA AZMI). This alliance which is far from just being a simple union of two young people becomes the seed for a story that brings twists and turns in the lives of Matru, Bijlee and Mandola. (c) Fox International

The film passed me by in the first hour. It enticed me back again in the second half. But not enough to make me forget the inert prologue, which is minus drama, which is Bhardawaj's true forte.

Save for a couple of visually engaging dance numbers, mostly shot with hand-held digital cameras, MKBKM is dishearteningly banal.

Judicious editing could have helped consolidate the joyfulness at the expense of occasionally repetitive narrative flab, but for the most part "Matru" is neatly energetic, a mix of screwball whimsy and softball seriousness.

A mix of gently outraged populism and low-powered romantic comedy, Vishal Bhardwaj's "Matru ki Bijlee ka Mandola" might have been better with a chunk lopped off its two-and-a-half-hour runtime.

Mixes Politics With Romance And Does Justice To Neither

Matru Ki Bijlee Ka Mandola is a disappointing film, one that could have been so much more.

A technically proficient widescreen opus that shifts, jarringly, between a generic love-triangle rom-com, a farcical political black comedy and a preachy message-movie. Some fragmented images and well-played moments leave an impact; most don't.

Scattershot romantic comedy about an arranged marriage between an heiress and a politician's son that will ruin several rural farms.

A zany satire that will leave you either mesmerised by its brilliance or just a little dazed by it's lunacy.

There are no featured audience reviews yet. Click the link below to see what others say about Matru Ki Bijlee Ka Mandola!