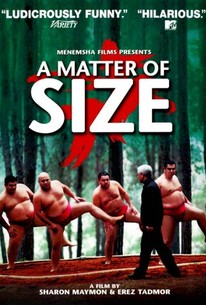 A Matter of Size Photos

A Matter of Size is an Israeli comedy (yes, comedy!) like nothing you've seen before, a hilarious and heart-warming tale about about a coming out of a different kind: four overweight guys who learn to love themselves through the Japanese sport of sumo wrestling! Herzl (Itzik Cohen) has been struggling with his weight ever since he was young, and his overbearing mother made it no easier on him. His friends Aharon (Dvir Benedek) and Gidi (Alon Dahan) struggle with the issue of weight in their personal lives as well; from fear of losing a spouse to a "thinner" man, to coming out as a gay bear. When Herzl loses his job as a cook and starts washing dishes in a Japanese restaurant, he discovers the world of Sumo, where large people such as himself are honored and appreciated. Through the restaurant owner Kitano (Togo Igawa), a former Japanese Sumo coach (supposedly hiding from the Yakuza in Israel) , Herzl and his friends fall in love with a sport involving "two fatsos in diapers and girly hairdos". However, Herzl's dedication to this demanding men-only sport threatens his budding relationship with Zehava (Irit Kaplan), a plus-size social worker.

Ofira Rahamim
as Gila
View All

Critic Reviews for A Matter of Size

Those elements make it hard to slot the movie into the happy category of quirky charmer and yet, while intriguing, they are never significant enough for the film to take on a larger personality.

An amusingly lightweight Israeli comedy about rebellious fatties who decide to use their heft for a greater purpose, A Matter of Size will have you ordering your popcorn with extra butter and refusing to feel guilty about it.

While the story may take place in working-class Israel in the 21st century, rejection is universal. So are most attempts to come to terms with it. Still, there's more than a little novelty value in the choices its characters make.

Herzl's approach might not be great for one's cholesterol or blood pressure, but it brings up an intriguing idea, one that isn't talked about often...: Maybe it would be better to be fat and happy than thin and miserable.

We're meant to like these men, and we do, more or less, but they've been simplified for easy digestion.

The humour in A Matter of Size is somewhat puerile, but the film does cover important social issues in its own gentle way.

Directors Sharon Maymon and Erez Tadmor avoid the temptation to remake The Full Monty, focusing instead on how physical training forces the characters to confront their buried psychological issues.

Israeli dramedy fights above its weight.

In the likable, if paradoxically lightweight Israeli comedy "A Matter of Size," an Israeli salad bar chef rejects the notion he needs to lose weight and learns to love himself.

...it's gentle humor and band of underdogs will surely bring a smile. It's a unique cross-cultural comedy.

Audience Reviews for A Matter of Size

This is in fact more a drama about self-acceptance than the comedy it is being labeled as, and it is much more efficient in its decent first half than after, when we are left with a pile of clichés and artificial conflicts that really make this a pretty forgettable movie.

A Matter of Size Quotes