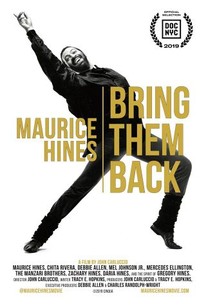 Maurice Hines: Bring Them Back is a portrait of the charismatic song-and-dance man from his tap-dancing childhood to today. Maurice and friends--Chita Rivera, Mercedes Ellington and Debbie Allen--tell tales from his seven-decade career, including Broadway shows, a co-starring role in Francis Ford Coppola's The Cotton Club and about his loving yet complex relationship with his superstar brother, the late Gregory Hines. Ever battling the challenges of being a gay, black man in show biz, Maurice shares his story with humor and grace. The documentary magically intercuts archival flashbacks with present-day Maurice, from age 73 to 75. Captured are explosive bursts of tap, comedic moments, and a palpable loneliness as he grapples with growing older without his younger brother by his side. Maurice, however, is anchored by the love and support of his family and friends.

Critic Reviews for Maurice Hines: Bring Them Back

For as mesmerizing and high energy as the film is, there's an underlying gentleness to it too.

This documentary that chronicles Maurice's achievements, ups and downs is pretty enlightening and certainly entertaining.

Digs much deeper than your usual showbiz doc.

It finds just the right balance between entertaining the audience and provoking them emotionally as well as intellectually while capturing Maurice Hines' humanity.

Maurice Hines: Bring Them Back ... weaves together a fascinating story by ... not forgetting to present an overall historical context of the groundbreaking things that Maurice did as an openly gay Black man in the entertainment industry.

There are no featured reviews for Maurice Hines: Bring Them Back at this time.

Maurice Hines: Bring Them Back Quotes