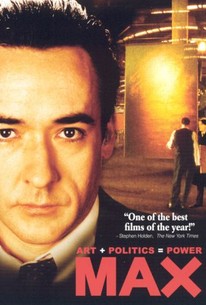 Critics Consensus: Well-acted in the execution of its provocative "what-if?" premise.

Critics Consensus: Well-acted in the execution of its provocative "what-if?" premise.

Critic Consensus: Well-acted in the execution of its provocative "what-if?" premise.

In the wake of his rise to power, Adolf Hitler became known as perhaps the most villainous and destructive political leader of the 20th century. But what was he like before he formed the Nazi party? Screenwriter and director Menno Meyjes explores that question in this drama, a work of fiction keyed to the fact that Hitler unsuccessfully pursued a career as an artist following World War I. In 1918, Max Rothman (John Cusack) is a former artist who lost an arm during the war. While Max can no longer create, his eye for talent is as keen as ever, so he has become a successful art dealer, specializing in Modernists such as George Grosz. Max's success has brought him a fine home and a beautiful wife, Nina (Molly Parker); he's also acquired a mistress, Liselore (Leelee Sobieski), a lovely young woman with artistic aspirations of her own. One day, Max meets Adolf Hitler (Noah Taylor), an emotionally intense, fellow war veteran who has found himself penniless in Munich. Adolf fancies himself an artist, and while Max isn't especially impressed with his technique, he sees in him a burning passion and a desire to communicate, so he encourages Adolf to express his demons through his art. While Adolf takes Max's advice to heart and strikes up a friendship with him, Max's friends find Adolf's open advocation of anti-Semitism rather troubling; Max, who is Jewish, simply chalks Adolf's attitudes up to unpleasant wartime experiences. But as Adolf immerses himself more deeply into his political interests and his thoughts on social engineering, he begins to leave painting behind in favor of a more interesting art form, the political arena. Max marked the first directorial effort of noted screenwriter Meyjes.

Kerric MacDonald
as Heckler in Courtyard

Peter Linka
as Soldier in Courtyard

László Görög (II)
as Someone in Crowd

Istvan Erdos
as Puppeteer
View All

The film is torn between playing [Taylor's] character for real and as a dangerous joke.

Meyjes focuses too much on Max when he should be filling the screen with this tortured, dull artist and monster-in-the- making.

Taylor, hawk-faced and gaunt, pours everything into his portrayal of Hitler, never once seeking our sympathy for this angry, homeless loner.

A fascinating and engrossing film.

Offers a persuasive look at a defeated but defiant nation in flux.

If it's not a completely successful film, it is at the very least an intriguing effort to humanize the demon.

It's a very philosophical film, with an interesting and somewhat fearless exploration of Hitler the man.

Any film as provocative and nervy as this one is bound to generate controversy...

Meyjes divides our attentions between the two major players, failing to take us far enough into either character's heart.

Max is also an intimate portrait of modern art; of the birth of the expressionist movement and great artists. . .

a brave film, showing Hitler as a pathetic cog in a larger machine hurtling inevitably towards the Holocaust.

I'd have thought it was impossible to overdo the role of Hitler, but Noah Taylor does just that in Max.

Cusack plays a Jewish art dealer who takes a young artist under his wing, by the name of Adolf Hitler. A compelling watch.

An art critic attempts to encourage a disturbing young man's art and dissuade him from pursuing political aspirations ... oh, and the young man is Hitler. A colleague recommended I see this film because, in his words, "People criticized it for humanizing Hitler, but I thought that was one of its strengths." His point is that we so often dichotomize, see historical and political differences in clear terms of good and evil: the bad guys have the red light sabers and the good guys have the blue or green ones. His point, and I would argue the film's point, is that human beings, even the most depraved ones, are motivated by a myriad of influences, and dichotomies, by definition, are reductive. The film presents Hitler in no gentle terms. He never smiles, but when you glimpse his teeth, they are nothing to behold, gray and misshapen. He screams a lot. He's remarkably insecure. The roots of his antisemitism are presented in no uncertain terms. He makes everyone around him uneasy. In the end, I would argue that the film didn't humanize him enough because the character, aside from his insecurity, is just as unlikable and impossible to identify with as you would expect. I'm not proposing that Hitler be portrayed in positive terms, quite the opposite. What I'm writing is this: here is a man who rose to power because something he said connected with people; he also was married. A humanizing portrait of him would get to the root of what his supporters saw in him even as we can whole-heartedly reject his ideology. But it's a noble, risky, and controversial proposition to begin with, and I think it's admirable for Max to attempt to make us see the world in less myopic terms. John Cusack is great as the Jewish art critic who attempts to take Hitler under his wing. The direction by Menno Meyjes is also quite strong, able to convey character and story in some single, beautifully framed shots. Overall, Max is not a great film, but it's an interesting conversation-starter; questions like "Is our historical understanding narrow?" or "Is this film's attempt immoral/unethical?" are worth asking.

Interesting but not great story about how Adolf Hitler's failed art career may have intercected with, and possibly actually inspired, his political career. This film is in the style of Gods and Monsters, whereby a actual historiical figure's life is placed into a fictional setting as a means of trying to discover "what happened." John Cusack plays a fictional Jewish art dealer named Max Rothman who meets a 30-year old Hitler (Noah Taylor) in 1918, right after The Great War. Rothman is aware of Hitler's Anti-Semitism, but sees it as a source of artist inspiration rather than a actual threat. Rothman tries to convince Hitler to channel his rage into his paintings. In the process, the young Hitler discovers his true calling. Cusack, who I normally adore, got good reviews for his potrayal here, but I just couldn't take him seriously as this haughty, somewhat pretentious art dealer. I guess I'm too used to him as Mr. Everyman. I guess the subplot of Rothman's love triangle between himself, his wife and his mistress fit in somewhere, but I found it unnecessary. Noah Taylor, while pulling off the passion of Hitler OK, seemed more to me as a Sid Vicious "sex, drugs and rock n roll" type rather than future leader of the Fatherland. On the good side, the film looks great. The set design and costumes were excellent and believable, especially the abandoned train station where Rothman had his art gallery. And the edited-together scenes of Hitler giving a rabid speech about Jew and "pure blood" with Rothman and his family during a Jewish religious service were interesting. The first few minutes of this film set up a mood for me that made me anticipate more than the film ultimately delivered. I may give Max another chance one day to see if I feel differently, but for now it's "good try but no cigar."

This is a fascinating look at rarely treaded territory...a chapter in the life of Adolf Hitler before his rise to power and European domination. This film focuses on a 30-year-old Hitler who has ambitions to become a successful artist, and is then taken under the arms of an amputee art dealer (played well by John Cusack), who befriends the socially awkward and ambitious Hitler as he develops his twisted political philosophies. Some might be turned off by this movie because it really puts a human perspective on Hitler that many might be uncomfortable with, since people tend to think of him as this iconic monster with no humanity at all. But this film doesn't make any excuses for Hitler, it simply helps to show how such evil can be brewed up in someone, and puts his life in a historical and human perspective that is really quite interesting. It shows how both his experience in WWI, and his ambitions as an artist really echoed into his personality as a ruthless totalitarian. Cusack plays a Jewish WWI veteran who has his own flaws, but at his core is a loving father and husband. The contrast between his personality, a genuinely kind-hearted working man, and Hitler's (Noah Taylor) is the most interesting aspect of the movie. The film wasn't without its flaws. For one, I don't think it gave credit to how smart Hitler was. It portrays him as more of an emotional and insecure wreck, but it was Hitler's cunning and persuasiveness that really rocketed him to power. He was an intelligent and smooth talker, but it's hard to see those aspects in Taylor's portrayal of him. I also wasn't a fan of the ending, it was a bit anti-climactic. But this film is definitely worth watching. Hitler is indeed a prime example of evil in human form, but regardless of that notion, the fact is that he is probably the most interesting historical figure of all time, and this story puts him in context with the rest of humanity and history, ultimately adding up to a very intriguing film.