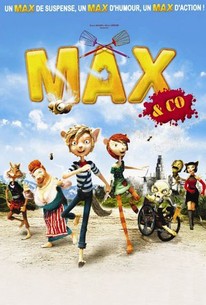 Filmmakers Frédéric and Samuel Guillaume team to direct this charming tale of a 15-year-old who sets out to find his long-lost father and instead stumbles into the adventure of a lifetime. Max's father was a famous troubadour named Johnny Bigoude who disappeared shortly after his boy was born. Now Max is a teenager who is known to the locals as something of a busker himself, and he's determined to find out what became of his old man. When Max hears word that Johnny is planning an underground gig in the small town of Hilaire, he hits the road and hopes for the best. Upon arriving in the town, Max quickly realizes that Saint-Hilaire is in fact a company town that seems to have been virtually monopolized by Bzzz & Co. -- a popular manufacturer of fly swatters. The manager in charge of operations is the indolent Rodolfo. Though initially hesitant to work for such a shiftless lout, Max soon meets the pretty Felice and decides to sign on with Bzzz & Co. anyway. Soon enough, however, Rodolfo's incompetence catches up with him and the shareholders make the drastic decision to fire half of the workers and bring in a stringent new management team. When a series of subsequent calamities send the townspeople into an uproar, it's up to Max and Felice to get to the bottom of the mystery and restore order in Hilaire.

Virginie Efira
as Voice
View All

There are no critic reviews yet for Max & Co.. Keep checking Rotten Tomatoes for updates!

There are no featured reviews for Max & Co. at this time.