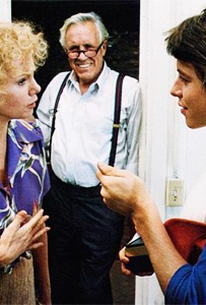 Max Dugan (Jason Robards Jr.) is an elderly ne'er-do-well whose tenuous mob connections have made him persona non grata with his daughter Marsha Mason. Struggling to raise her restless son Matthew Broderick on her own, Mason is none too pleased when Max returns to the family fold with yet another portfolio of get-rich-quick schemes. Forced to leave town due to the investigative habits of cop Donald Sutherland, Mason's new boyfriend, Max does one last good deed to renew the faith of the disillusioned-with-life Broderick. Watch for Donald Sutherland's son Kiefer in his film debut, and for former Kansas City Royals' batting coach Charlie Lau in the baseball-game finale. ~ Hal Erickson, Rovi

Charley Lau
as Himself

Irene Olga Lopez
as His Wife

Robert Darcy
as Cabbie
View All

A consistently happy comedic fable which should please romanticists drawn to a teaming of Neil Simon, Marsha Mason and Herbert Ross.

Simon's gift also is his downfall. He's so good at writing lightweight dialogue that it all begins to sound the same.

There are certainly some questionable ingredients to the story, but you're not likely to notice them while the film is under way. You're likely to be laughing.

A clumsy, heavy film, its most profoundly expressed emotion is greed.

Ultimately, watching Max Dugan Returns is like being assaulted by one street corner Santa Clause after another.

Max Dugan Returns could have become an interesting story, but it is limited to being a sketch, a simple starting point. [Full Review in Spanish]

This sentimental outing was written by Neil Simon and stars Marsha Mason as Nora, a single parent trying to raise her son Michael (Matthew Broderick).

Crowd-pleasing domestic comedy that's based on a Neil Simon screenplay.

A great family comedy drama, again with the cute young Broderick, I loved this movie, it's charming. Oh, and just so you don't get confused like I did, this movie isn't a sequel to anything.

Charming fable. Jaon Robards is irresistible as the wandering dad.

A real charming movie from 1983. What would you do if someone suddenly gave you everything you ever wanted. That's what happens when Nora's long estranged father Max shows up on her doorstep one rainy night carrying a satchel filled with $687,000. Max only has 6 months left to live, and wants to give Nora, a struggling schoolteacher, and her young son Michael, all the luxuries he can in the time he has left. The problem is, the money Max has, he stole from a casino he worked at in Vegas. To further complicate matters, Nora has just started dating Kevin, who is a police detective. Bestowed with amazing gifts, from new appliances, to a brand new Mercedes, to a completely refurbished house, Nora tries to hide her father's identity, and explain away her seemingly new found wealth. Jason Robards gives a poignant performance as Max, a lifelong ne'er do well, who tries to make things right with his family. Marsha Mason is charming and hilarious as the put upon Nora. Kiefer Sutherland is solid as the police detective torn between his feelings for Nora, and the nagging feeling he has that all is not as it appears with her. The movie features Matthew Broderick, in his film debut, as Nora's son Michael, a kid who hits the jackpot, and doesn't see his mother's problem with taking what Max is giving them. It's a very Frank Capra-esque fantasy, that showcases the fantasy that everyone who struggles with everyday life would feel if their ship suddenly came in. A feel good movie if there ever was one, it's also the screen debut of 24's Keifer Sutherland.