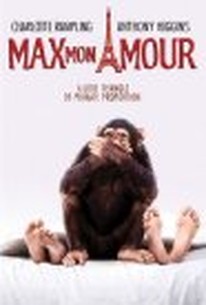 Fabled Japanese filmmaker Nagisa Oshima was the guiding hand behind the fast-paced French comedy Max, Mon Amour. The "Max" with whom the elegant Charlotte Rampling falls in love is a circus chimpanzee (played by a short-statured man in a monkey suit). Charlotte's British-ambassador husband Anthony Higgins has long suspected that his wife was cheating on him, but he certainly isn't prepared for her simian paramour. Amazingly, the film never descends into goofiness: Oshima uses his unorthodox plotline to poke holes in the self-protective pretensions of the Bourgeoisie. ~ Hal Erickson, Rovi

Max Mon Amour isn't as good as [Nagisa Oshima's other] movies, but then what else is?

Leaves us with nothing much but a vague sensation of surrealism that comes from seeing an affair between a woman and a chimp being treated in a matter-of-fact way.

Impossible to take seriously or as satire, this film is an embarrassment to humanity and our cousins in the jungle.

Despite the potentially subversive material, the film frankly lacks bite.

A wry mix of King Kong and My Man Godfrey, it's a potent premise that somehow never catches fire...

The movie gets boring when it fails to make the absurdity credible. [Full Review in Spanish]

It's the kind of inane pic that makes you wonder why Oshima was drawn to it.

On the whole, it works as a witty, black comedy of manners that judiciously avoids the vulgarity inherent in the subject.

If you've wondered what kind of continental TV pilot Sherwood Schwartz might have devised from watching Zoo, here's your answer.

There are no featured reviews for Max My Love (Max Mon Amour) at this time.