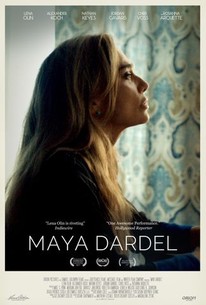 The film depicts the final weeks leading to the ambiguous disappearance of Maya Dardel, an internationally respected poet and novelist, who lived until 2016 in the Santa Cruz Mountains of California. Maya announces on National Public Radio that she intends to end her life and that young male writers may compete to become the executor of her estate. They are challenged intellectually, emotionally, erotically, until one of them begins to fathom Maya's end game.

A movie that's by turns off-putting, bracingly incisive and insufferable.

The film has much to recommend it, in particular its lack of sentimentality about suicide, art, womanhood.

The red-blooded vivacity of Ms. Olin's performance ... pierces through the muck. She chews feeble lines like meat, spitting out the masticated remains.

Is Maya Dardel serious? The regal Lena Olin plays her with frank ferocity and arrogant certainty, but so much about the grandiose poet borders on parody.

A film that only serves as a reminder that Lena Olin can still deliver a fantastic performance, even if it's buried in a piece of overwritten nonsense.

Olin is so spell-binding...just watching her is treat enough.

Lena Olin is captivating as Maya.

Originally titled A CRITICALLY ENDANGERED SPECIES, as if to imply the threat to genuine creatives, the threat to this film is very much an internal one.

Perhaps it's not the most exciting or invigorating film, but as a thesis statement, it's certainly worthwhile.

That's not a way of saying, "Don't bother with this movie." By all means, bother. Just know that the human munition in the title role is so screen-filling that the actual story is a little flat by comparison.

Whilst it has many problems, Maya Dardel is a fascinating film, if not an enjoyable one.

Maya Dardel is cruel and unusual punishment-I thought that was unconstitutional.

There are no featured audience reviews yet. Click the link below to see what others say about Maya Dardel!