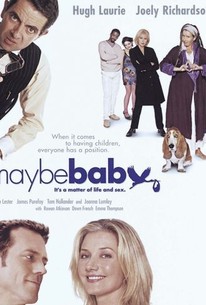 Critics Consensus: A likable cast gives Maybe Baby some romantic appeal, but its noncommittal tone makes for an earnest comedy that isn't as funny or sincere as it wants to be.

Critics Consensus: A likable cast gives Maybe Baby some romantic appeal, but its noncommittal tone makes for an earnest comedy that isn't as funny or sincere as it wants to be.

Critic Consensus: A likable cast gives Maybe Baby some romantic appeal, but its noncommittal tone makes for an earnest comedy that isn't as funny or sincere as it wants to be.

In this light comedy directed by British writer-comedian Ben Elton, Sam and Lucy Bell (Hugh Laurie and Joely Richardson) are an upwardly mobile London couple who are trying desperately to conceive a baby. Along for the ride, which is laden with sperm-count and hormone-injection jokes, is a cast that reads like a Who's Who in British comedy. Rowan Atkinson makes an appearance as an obstetrician, Dawn French and Joanna Lumley show up as an Australian nurse and Lucy's snooty boss, and Emma Thompson has a stint as a New Age health freak. Adrian Lester and Tom Hollander also co-star, the latter as a Brit-loathing Scottish director.

Dave Thompson
as Dave the Comedian

Connor Pearce
as Boy on Bike in Park

Henrietta Garden
as Mother in Park

Bill
as William the Dog

Ben
as William the Dog
View All

If ... you can still imagine that this might be just the kind of movie for you, please stay tuned for the forthcoming article about my resignation.

Just a bit of romance-comedy fluff.

A romantic comedy so slick you can see the reflection of a hundred better movies in it.

This would be a stultifyingly incestuous affair even if all the jokes about fertilization weren't so tiresomely lame and predictable.

A perceptive comedy, punctuated with hilarious appearances from such notable faces as Emma Thompson and Rowan Atkinson.

The problem with this romantic comedy is that although it eventually winds its way to a conclusion that feels right, it takes too many convoluted steps to get there.

Both poignant and outrageously funny.

It features boring cliches and a positively awful leading lady.

So much genuine talent wasted in this blah rather mean spirited purported comedy which has nary a laugh within. Watch only if you want to see many fine performers employed in a project beneath any of their talents.

i liked it i thought it was funny and different and hugh laurie is hot in it! worth a watch

Hugh Laurie did some appalling crap before he settled into the role of the superb House, and this is one example. All the usual faces go through the motions of 30-something observational romantic comedy, directed by Britain's biggest sell out Ben Elton. An example of everything I detest about british comedy.