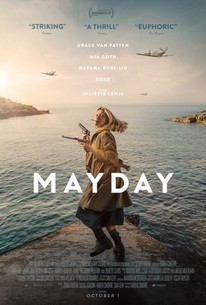 Critics Consensus: Viewers may not be left sending out distress calls, but despite interesting ideas and a solid setup, Mayday leaves a frustrating amount of potential untapped.

Critics Consensus: Viewers may not be left sending out distress calls, but despite interesting ideas and a solid setup, Mayday leaves a frustrating amount of potential untapped.

Critic Consensus: Viewers may not be left sending out distress calls, but despite interesting ideas and a solid setup, Mayday leaves a frustrating amount of potential untapped.

Ana (Grace Van Patten) finds herself transported to a dreamlike and dangerous coastline. Once there, she joins a female army engaged in a never-ending war where the women lure men to their deaths with radio signals, like 20th century sirens. Though Ana finds strength in this exhilarating world, she comes to realize she is not the killer they want her to be.

Zlatko Buric
as Max / The Cook

It's an interesting cast and it's a beautiful film. Kind of falls apart by the end, but I liked it for a while.

Despite a strong ensemble of actors and some impressive photography, Mayday drowns inside its own overambitions.

This is a music video, not a film, with storytelling that neither shows nor tells.

Cinorre's opening is electrifying but its focus eventually wavers like a faraway radio signal.

For a film about misandrist revolutionaries, "Mayday" lacks the courage of its convictions - it sets up boogeymen as targets only to shoot them point blank, in broad daylight.

The movie awkwardly mixes heavy-handed preachiness about misogyny with incoherent storytelling wrapped in a war movie ... Simply put: Mayday is the type of movie that gives feminism a bad name.

The premise is half-baked and not ready to be taken out of the oven.

The film is surreal at times, when switching from reality to fantasy and with a somewhat obvious overarching 'lesson' to be learnt, the story does lose its focus. However, Mayday does have some beautiful imagery, a cinematic setting and a fine cast.

Some men may hate this artistic, visionary, and brilliantly original feminine fantasy -- so be sure to read critical reviews with that in mind.

With a strong concept at its core, Mayday lacks any real development and only scratches the surface of something that could have been so much bigger and better.

Still, sticky as some possible readings of Mayday can be, it's perhaps a mistake to ascribe a concrete meaning to what is essentially meant to mimic a dream.

There are no featured reviews for Mayday at this time.