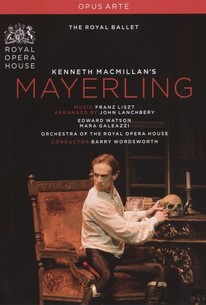 Princes don't always get happy endings. This very adult ballet chronicles the lead-up to the mysterious death of a real-life heir to the Austro-Hungarian throne, complete with lavish costumes, passionate music by Liszt and a central role that presents the ultimate challenge for the leading man, in this case The Royal Ballet's Edward Watson. The ballet compresses the final eight years of Crown Prince Rudolf's life into a relentless downward spiral of political intrigue, drugs and murder. It culminates in 1889 with the suicide pact at the hunting lodge known as Mayerling between Rudolf and his 17-year-old mistress, the fervidly neurotic Mary Vetsera.

There are no critic reviews yet for Mayerling: The Royal Ballet. Keep checking Rotten Tomatoes for updates!

There are no featured reviews for Mayerling: The Royal Ballet at this time.