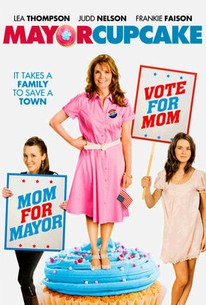 An uneducated, small town baker is catapulted into the mayor's office after the incumbent mayor experiences a debilitating accident. Bridgestone cupcake maker Mary Maroni (Lea Thompson) is a successful businesswoman, and a happy homemaker. The mother of three children, Mary finds her already-busy routine shaken up considerably after her daughter quietly nominates her for the office of mayor. As fate would have it, the current mayor quickly becomes unfit to serve, leaving the position wide open for the reluctant newcomer. Later, just when Mary starts to sense that she's gotten in over her head, she learns that no problem is too big when your loved ones are there to offer a helping hand.

There are no critic reviews yet for Mayor Cupcake. Keep checking Rotten Tomatoes for updates!

There are no featured reviews for Mayor Cupcake at this time.