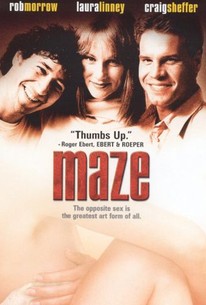 An artist with Tourette's syndrome and an aversion to romance falls for his best friend's girl in this sometimes comic drama. Lyle Maze (Rob Morrow), a successful painter who's also starting to explore sculpture, relies on emotional armor a foot thick to protect him from other people. In addition to suffering from uncontrollable physical tics and loud outbursts, Lyle is also prone to obsessive-compulsive disorder. Afraid that his artistic gifts and his disease spring from the same well, he eschews the well-meaning advice of his doctor pal, Mike (Craig Sheffer), and refuses to try the new drug therapies available. He also rejects any attempt to fix him up with women. But when rebel-without-a-cause Mike decides to tilt at windmills in Africa for seven months as a member of Doctors Without Borders, Lyle finds himself in a precarious position. Callie (Laura Linney), Mike's acerbic ad-exec girlfriend, has confided to him that she's pregnant but unwilling to use her condition as leverage to shore up her troubled relationship. Soon, Lyle is coaching Callie through natural childbirth classes, playing surrogate father-to-be, and falling in love. Inspired by the documentary Twitch and Shout, Maze marked the first trip behind the camera for actor Rob Morrow, who played another man with Tourette's in the film Other Voices. In addition to directing and starring in Maze, the Northern Exposure star co-wrote and co-produced.

In the end, you just feel good about these people, and that's a nice sensation these days.

The best kind of independent filmmaking to shame the somnolent mainstream.

Morrow illuminates all the challenges facing the individual coping with Tourette syndrome while showing that Lyle is much more than the sum of his afflictions.

A movie that both Oprah and Hallmark would be proud to stamp with their seal of approval.

What drains the movie is that Lyle is such a sweet, noble, suffering soul that he simply sponges our interest into banality.

Linney's finely calibrated, low-key performance as Callie goes a long way towards making it more interesting than it might otherwise be.

There's a by-the-numbers inevitability to every scene, and it never clicks into place to be anything special.

Morrow the actor tries too hard (Morrow will rob Oscar blind!), but he's a stylish director with a steady hand and a shaky eye.

While his performance doesn't exactly measure up to Robin Tunney's turn in Niagara, Niagara, Morrow's clever direction is enough to warrant a trip to the theatre.

There are no featured audience reviews yet. Click the link below to see what others say about Maze!