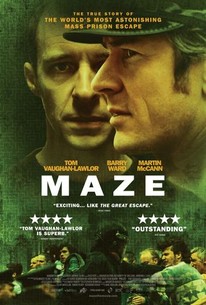 Maze is the incredible true story of the 1983 mass break-out of 38 IRA prisoners from the HMP Maze high security prison. Larry Marley (Tom Vaughan-Lawlor) (Avengers: Infinity War), is chief architect of the largest prison escape in Europe since World War II. While scheming his way toward pulling off this feat, Larry attempts to establish a friendship with prison warder Gordon Close, (Barry Ward, Jimmy's Hall). Their relationship represents the first green shoots of the eventual peace process.

Us Is Certified Fresh

What Maze gains in its depiction of history, it loses in emotional strength.

Time is a healer, and this film educates as well as entertains.

"Maze" doesn't have much action until the end and even that is fairly muted and low-key compared to what might be expected from a Hollywood movie on the same topic. But that's exactly what makes "Maze" impressive.

When you add in the tip-top tension created by the legendary break itself, not to mention the verisimilitude of shooting in a recently decommissioned prison, you end up with a small film with an impressive impact.

It's an intelligent, well-done film whose restraint can be commended. But it also operates at such a slow burn that it comes close to fizzling out completely.

Writer/director Stephen Burke doesn't take a side and, instead, simply looks on with lament at the toll of the strife.

Mixes the suspense of plotting an escape dependent on split-second timing with the psychological games the prisoners play with the guards and with each other. The result is a film that is gripping for reasons not usually associated with suspense films.

Stephen Burke's story is competently told and the escape itself is nicely handled.

What Maze does impressively is blend historical context with genre filmmaking, managing to feel both important and exciting.

You will be riveted to your seat in what is a refreshingly authentic film, which has not one false note.

Aside from one early skirmish and the rather chaotic escape itself, Burke's thoughtful script mostly unfolds without the usual prison-movie tumult.

There are no featured audience reviews yet. Click the link below to see what others say about Maze!