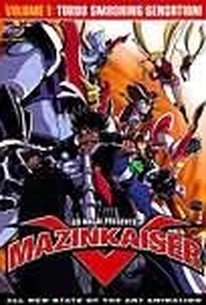 In this anime series, Kouji Kabuto and the rest of the Photon Team unleash their secret weapon, the Mazinkaiser battle robot, when they face off against their old nemesis Dr. Hell, who's created a fearsome robot army and is bent on world domination. Dr. Hell and his henchman, Baron Ashura, are building new war machines as fast as Kabuto and his comrades can destroy them, and the pair's first target is the photon power lab.

There are no critic reviews yet for Mazinkaiser. Keep checking Rotten Tomatoes for updates!

There are no featured reviews for Mazinkaiser at this time.