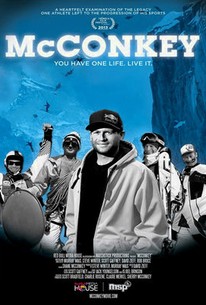 "McConkey" is a heartfelt examination of the legacy one athlete left to the progression of his sports, and the path he paved to conquer his dreams. Shane McConkey is revered as a pioneer of freeskiing and ski-BASE jumping, and through his talent and ability to use his trademark irreverent humor, he inspired countless lives. In a new film from Red Bull Media House in association with Matchstick Productions, "McConkey" celebrates the life of one of the world's ultimate innovators. (c) Official Site

It's not about why he was such a thrill-seeking risk-taker but about appreciating his success in living life on his own terms.

Witnessing him defy long odds, gravity and death is a thrill; even the uninitiated should find his unresolved father complex of interest.

The grief we see among those who loved him is brief yet palpable. But the emotion we're left with is more uplifting ...

His life journey was brief but breathtaking, so it's fitting that this first biographical portrait of Shane McConkey matches the same description.

There are no featured audience reviews yet. Click the link below to see what others say about McConkey!