Me and You and Everyone We Know2005 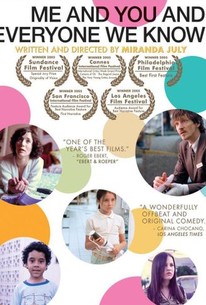 Me and You and Everyone We Know Photos

'Me and You and Everyone We Know' is a poetic and penetrating observation of how people struggle to connect with one another in an isolating and contemporary world. Christine Jesperson is a lonely artist and "Eldercab" driver who uses her fantastical artistic visions to draw her aspirations and objects of desire closer to her. Richard Swersey (John Hawkes), a newly single shoe salesman and father of two boys, is prepared for amazing things to happen. But when he meets the captivating Christine, he panics. Life is not so oblique for Richard's seven-year-old Robby, who is having a risqué internet romance with a stranger, and his fourteen- year-old brother Peter who becomes the guinea pig for neighborhood girls -- practicing for their future of romance and marriage.

Critic Reviews for Me and You and Everyone We Know

A perfectly-realized vision: from the sound design to the acting to the direction. For a first film, I was astounded.

"Me and You" has a refreshingly unhysterical (but sometimes hysterically funny) take on what it's like for kids to grow up in a world of Internet sex, broken families and precocious sexual curiosity.

Click with it and there are elements to enjoy, but the title suggests a universal significance the film can't supply.

It seems quite possible that Me and You marks the arrival of an artist who may affect -- disturbingly yet helpfully -- films and audiences to come.

Here's a perfectly twee little romance all but smothered in a blanket of indie 'edge.'

It's a powerful, beautiful and often funny look at life as we truly live it in all its mundane moments and simple connections.

The sort of movie specifically designed to win awards at hipper-than-thou film festivals (and it did).

Writer/director Miranda July's exquisite romantic comedy is one of the most original and unique films of recent memory.

A refreshingly un-ironic slice of life, free from cynicism, with an infectiously upbeat outlook that lifts the spirits and makes the heart soar.

Fittingly for a film with such an all-inclusive title, July finds something wondrous in peoples' interactions in everyday life.

Much of this is far too precious - it's mostly for adults who impulsively put socks on their ears, as a character does here.

Audience Reviews for Me and You and Everyone We Know

Lonely people converge in various storylines involving sexual development and the improbability of connection. It's been a long time since I've seen a film that has been able to find profundity in life's little moments, but Miranda July's tour de force work in Me and You and Everyone We Know is able to find gems in everyday occurrences. The most striking example of the beauty she finds in the benign happens in the third act, so I won't give in away, but the rest of the film is subtle and poignant too. And what is a better example of achieving the Altman Standard than the reveal of whom the boys are cyber-sexting with? I did think the film occasionally got quirky for quirky's sake like Christine putting socks on her ears, but the film's concentration on these characters' oppressive and oppressing loneliness makes the things they do for attention and recognition more motivated than a film with a weaker thematic through-line. Overall, Miranda July has a new fan, and I have a new example of why film can be a medium that communicates the occasional sublimity of life better than any other.

Quirky, energetic and out-there. I absolutely loved it!

Oh-so-weird/indie/pretentious......but oh-so-irresistibly cute/sad/beautiful in parts (and trust me, I tried hard to resist): Richard accidentally self-immolating his hand with lighter fluid instead of alcohol; six-year-old Robby innocently cybering about pooping back and forth into each others' buttholes; Christine and Richard's meet-cute wherein they pretend to live their entire relationship together in a few street blocks; the sustained eye contact between Christine and Richard after he rejects her; Christine and Richard holding her mirror for fifteen seconds after gluing it; Peter bringing a stuffed animal for Sylvie's neurotically early hope chest, which she had heretofore filled with household appliances. The only story I wasn't into is the two neighborhood Lolitas trying to bait a potential pedophile. None of their motivations were set up properly. The filmmaker Miranda July seems like a total wackjob, but I guess I'll give her props for being so open with her wackjobiness, for instance, Christine, her performance artist alter ego (I'm assuming). The goofy Casio keyboard-esque score is a bit cloying at times but oddly atmospheric. I am very much enamored by John Hawkes' pugilist nose and sunken eyes. He's like an older, sadder version of DJ Qualls.

This is an all time favourite I finally got around to rewatching. I saw it quite a few times after I bought the DVD, but not for a good few years now. I have to say, it is still excellent. Miranda July has done a great job on this - both as the quirky lead actress and with directing it. This is a true to life little story with believable yet eccentric characters, all well written and all perfectly cast, though I would say they are pretty much unknowns. Miranda plays Christine, a struggling writing/performer who drives the elderly for a day job. She meets shoe salesman, Richard (John Hawkes) who is going through a relationship breakup and adjusting to only having his two boys part time. There is an attraction between the two, but he is wary of getting involved again as his ex has been quite callous. His boys are also slight troubled. The youngest, Robby, has stuck up an internet romance with an older woman, and he makes her a proposition that i can't believe she accepts. (Obviously she does not realise he is a child). It would probably be revolting if it wasn't so beautifully and innocently written. I also like the teen girls, Heather and Rebecca, who are leading on an overweight older guy who likes to watch them, but doesn't have the nerve to do more than write notes and watch out his window. The young character, Sylvie, is also amusing, as she collects household utensils obsessively so she will have a dowry and glory box ready for her marriage. (Sylvie is about ten years old). This kind of reminds me of Todd Solondz, another favourite director of mine, but these characters are basically good, where a lot of his aren't so much. A movie about flawed and real people that is sad as well as funny. I love this movie and highly recommend it!

Me and You and Everyone We Know Quotes