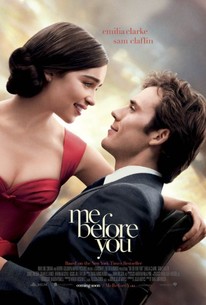 Critics Consensus: Me Before You benefits from Emilia Clarke and Sam Claflin's alluring chemistry, although it isn't enough to compensate for its clumsy treatment of a sensitive subject.

Critics Consensus: Me Before You benefits from Emilia Clarke and Sam Claflin's alluring chemistry, although it isn't enough to compensate for its clumsy treatment of a sensitive subject.

Critic Consensus: Me Before You benefits from Emilia Clarke and Sam Claflin's alluring chemistry, although it isn't enough to compensate for its clumsy treatment of a sensitive subject.

Me Before You Videos

Me Before You Photos

Adapted from the bestselling novel by Jo Jo Moyes, Me Before You tells the story of the unexpected relationship that blossoms between a contented small town Englishwoman and the wealthy, paralyzed Londoner who hires her as his caretaker. Theater director Thea Sharrock makes her feature directorial debut with this MGM/New Line Cinema co-production. ~ Jason Buchanan, Rovi

Diane Morgan
as Sharon The Waitress

News & Interviews for Me Before You

View All Me Before You News

Critic Reviews for Me Before You

Solid performances don't balance out the problematic parts of Me Before You, which are many.

Me Before You has no interest in the realities of life with disability; it is, rather, yet another variant on a threadbare formula.

In other words, if you've ever wanted your romance with a side of disability and chronic pain, Me Before You is perfect for you - as long as you don't actually want a realistic depiction of any of those things.

Me Before You presents itself as classier than its genre, but it fundamentally delivers an imbalanced central relationship that comes off as quite sexist.

The ultimate treatment of the heart of this story leaves us with a more bitter than sweet taste.

Sigh. Folks. It's 2016. I mean, seriously. Aren't we past these pathetic stereotypes by now? Can't we move away from these ridiculous disability as tragedy storylines?

It doesn't have anything interesting to say about its themes or characters - they all exist within a generic and simplified love story.

I didn't approve of it. I think it's a bad message to be sending.

Through sheer force of charm alone, Claflin puts the audience into his moneyed and manicured corner, to wish him whatever happiness he and his chipper miss can muster.

Audience Reviews for Me Before You

Much better than I expected. Actually quite funny and nice viewing. I thought it would be very sad and serious. I loved all her clothes too.

It's a very cutesy romcom that is bound to make you smile and weep!

Free-spirited and quirky Louisa takes a job as companion to quadriplegic Will Traynor who is now surly and disheartened about losing his once charmed life. Usually daunting Emilia Clarke is adorably giddy, and Sam Claflin is Sam Claflin, the handsome asshole with a sensitive soul underneath. The love story is quite predictable, but there's a second-act moral conundrum that provides some suspense. What's utterly stupid about this movie is that despite Lou being the ostensible protagonist, she is STILL merely a supporting character in her own story. The central moral question of the film is Will's, and everything Lou does is in aid of that plotline. It's not even clear how and when she falls in love with Will. It's never talked about, and she lacks the agency to leave or at least tell off her well-meaning but clueless boyfriend or to follow her dreams of fashion school. I'm also chafed because Will tries to pilot Lou's life from the start: telling her what movies to watch and how to wear a dress with confidence (I mean, really?! She's already smokin'!) and how to party like the grand adventurer he once was, and he continues to do so (*spoilers*) even beyond the grave, down to what Parisian perfume she should wear! He also obnoxiously calls her by her last name "Clark" all the time, which any girl who's had a middle school crush on that cool skater boi knows is a familiarizing but controlling tactic that makes us happy and hungry for his approval. Was Will always this arrogant and patriarchal? Was his life truly charmed? That seems to be a better dramatic question, but the movie would still be about him. Lou is defined by the men around her, and that still seems to be the case from the synopsis of the sequel novel in which she meets a new man who helps her get over the erstwhile "You." Bleagh.

Now, if you are someone who believes this film looks too sappy or too much of the same, as far as films in this genre go, then I can tell you right off the bat that it is not for you. What I will say is that it is also a film that is far better than the trailers are displaying, even if it still has the elements advertised. "Me Before You" follows Lou as her and her family are suffering with money. Being driven to find any job available to her, she ends up taking care of a rich business man who has been paralyzed from the chest down, with no likely chance of improvement. If that seems like a depressing film, that is because it is. This film lifts up viewers spirits as much as it can and with the chemistry on-screen between Emilia Clarke and Sam Claffin, it may just sway you into thinking this film is fantastic. That is where you must think long and hard about the film you are watching. "Me Before You" benefits from extremely powerful performances all around, making it very difficult to see the small hiccups in scenes, especially involving the two leads. As far as flaws go, there really is not anything to complain about, because the film plays it very safe in terms of trailing too far off course and disappointing fans. The film sticks with the same idealistic tone throughout and never really strays, unless it is trying to bring much needed levity to a dour sequence. Written for the screen by Jojo Moyes, whom also penned the novel, the screenplay feels very much like novel exposition. This actually works very well in favour of this film, as the setting fits the type of dialogue being delivered. It usually works in favour of the film being good if the novelist writes the best version of the film that he/she sees fit. Personally, I think this film (although never having read the novel) translated pretty well to the big screen. Overall, "Me Before You" may be exactly the type of film you think it is, but it definitely has a few surprises up it's sleeve, as far as emotion goes. It is a very emotionally effective film that has just the right amount of charm and dourness. There are a few too many "Nicholas-Sparksy" moments where popular music plays to remind the audience what is going on in each of their minds, which can easily take the average moviegoer out of the scene, but that is a very forgivable editing choice. For all of it's missteps, predictability, and sappy character narration, this film works far better than I expected it to. This is one effective romance story that I can recommend to anyone who is a fan of this genre. "Me Before You" is an effective and serviceable romance.

Me Before You Quotes