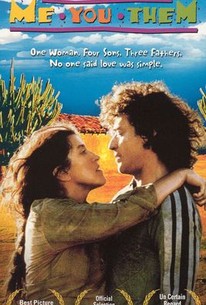 Critics Consensus: Me You Them tells a warmly comical and touching story, and features a charismatically earthy performance by Casé.

Critics Consensus: Me You Them tells a warmly comical and touching story, and features a charismatically earthy performance by Casé.

Critic Consensus: Me You Them tells a warmly comical and touching story, and features a charismatically earthy performance by Casé.

Me You Them Photos

The legendary Brazilian songsmith Gilberto Gil supplies the score for this reality-based comedy, in which an independent-minded woman decides that if one live-in husband doesn't fulfill her needs, she can always add more. The film begins when Darlene (Regina Case) returns to her small, dusty hometown in northern Brazil to receive her mother's blessing for her for young son Dimas. When she arrives, she finds that her mother has died; her funeral occurs the day Darlene arrives. Despondent over her new predicament, she accepts an extemporaneous marriage proposal from her neighbor Osias (Lima Duarte) and moves in with him. It becomes clear to Darlene, however, that Osias wants little more than a live-in maid. Darlene becomes pregnant and bears a child -- who bears no resemblance to the light-skinned Osias. When Osias' cousin Zezinho (Stenio Garcia) comes to town and takes an immediate liking to Darlene, she doesn't turn him away -- before long, she's bearing his son as well. As the eager-to-please Zezinho takes over her housekeeping duties, Darlene decides that the one thing she's lacking in her life is true passion, and fills that void with a sugar cane worker named Ciro (Luis Vasconcelos), who moves in as well. Eu Tu Eles was purportedly inspired by a Brazilian news story about a woman in a similar alternative-living situation; the film screened at the 2000 Cannes, Tokyo, and Toronto Film Festivals before making its stateside premiere.

Critic Reviews for Me You Them

Excellent performances, combined with deft direction make this one to watch.

The performances are charming and natural enough to draw you into this peculiar love quadrangle.

[Case's] dazzling smile and surprising physical grace make Darlene into a primal force in the lives of these three men.

It has been made and acted with intelligence and evident love, which deserves to be requited.

The big screen hasn't shown us a more earthy, commanding woman since Italy's iconic Anna Magnani made her stand.

So generally downbeat that it's difficult to stay awake, let alone laugh, cry, or cheer.

One might argue that "Me You Them" could perhaps use a small infusion of MTV-style editing but this director trusts the material to unfold at the pace it requires.

Warm and bright and colorful, a real charmer as easy to inhabit as Casé slips into her character.

Credit director Andrucha Waddington and writer Elena Soarez for keeping it out of the sex-farce genre.

As filmmakers continue to run out of 'original' stories to tell, it's becoming abundantly clear that there's a simple solution to the problem -- tell more 'real' or 'true' stories.

If people in the movies are going to live in dirty shacks without plumbing or senses of humor, they better do something compelling to hold my interest.

Audience Reviews for Me You Them

There are no featured audience reviews yet. Click the link below to see what others say about Me You Them!

Me You Them Quotes