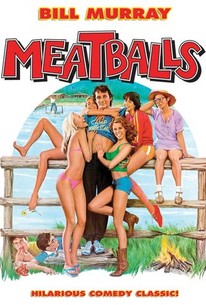 Critics Consensus: Meatballs is a summer camp comedy with few surprises, but Bill Murray's riffing adds a spark that sets it apart from numerous subpar entries in a frequently uninspired genre.

Critics Consensus: Meatballs is a summer camp comedy with few surprises, but Bill Murray's riffing adds a spark that sets it apart from numerous subpar entries in a frequently uninspired genre.

Critic Consensus: Meatballs is a summer camp comedy with few surprises, but Bill Murray's riffing adds a spark that sets it apart from numerous subpar entries in a frequently uninspired genre.

Set at a low-end summer camp and aimed squarely at a teen audience, Meatballs is a light screwball comedy that turned its low-budget Canadian roots into a very profitable box-office run. The biggest reason for the film's success is Bill Murray who stars as Tripper, the head counselor who runs things at Camp Northstar with the help of his love interest Roxanne (Kate Lynch) and the camp's director Morty (Harvey Atkins), who is affectionately known as Mickey. Camp opens with Tripper and Morty preparing the misfit counselors-in-training -- Spaz, Fink, Crockett, A.L., Candace, Wendy, and Wheels among them -- for the arrival of their hyperactive little charges. After settling in, kids and counselors begin their activities with a soccer game in which depressed 11-year-old Rudy (Chris Makepeace) accidentally loses the game. Cast out by the other children, Rudy runs away only to come across Tripper, who befriends the boy and makes him his running partner. Romance, sexy fun, and comic hijinx -- usually with the heavy-sleeping Morty as their target -- lead up to an annual Olympiad in which Camp Northstar battles the wealthier and athletically superior residents of Camp Mohawk. The challenging events include cup stacking, potato-sack racing, and a nauseating hot dog-eating contest in which the portly Fink devours his way to victory. With the two-day event tied up, it comes down to the cross-country run, in which Tripper enters Rudy. Meatballs was the first major directorial effort by multi-talented filmmaker Ivan Reitman, whose name has since become synonymous with the comedy genre. ~ Patrick Legare, Rovi

Larry Solway
as Interviewer
View All

If one or two fall flat, so what. The next probably will hit your funnybone.

Through it all, Murray smiles and forges ahead, but his big riffs have been edited down to frantic bursts of mugging.

It's difficult to come up with a more cliche situation for a summer pic than a summer camp, where all the characters and plot turns are readily imaginable. That makes director Ivan Reitman's accomplishment all the more noteworthy.

Camp counsellor Tripper (Murray) is a John Belushi clone whose 'charisma' dominates the film's standard wackiness and sentimental story (of a kid who doesn't fit).

A cheerful, if not particularly deft, summer-camp comedy.

...while Meatballs is not a very good movie, you still kind of wish you could have gone to Camp North Star as a camper.

Amusing in an antiquated way? Perhaps. But funny? No.

I can't really say Meatballs is a great film, it's a silly, stupid summer movie, and sometimes, that's exactly what you need.

For those of you that are big fans of the cult comedy hit Wet Hot American Summer, Meatballs is the summer camp movie it parodied the most, even though Meatballs had a bigger heart and was strictly PG.

It's Murray's spontaneity that gives the movie its lifeblood. But Murray also shows an early, rare example of onscreen tenderness.

The scenes between Murray and Makepeace are nicely handled, and the lack of mean-spiritedness is refreshing.

A bit slow and meandering, and unfunny when Bill Murray is not on screen, but Meatballs is worth it for the camp atmosphere and Murray's comic genius.

With a tip of the hat to Robert Altman's M.A.S.H,, we join 'the other guys'(who are not rich, or privileged, or anything like that) kids at summer camp as they learn important life lessons like 'we ARE just as good as the rich and privileged kids' and 'we may not have masseuses or chauffeurs but we still know how to have fun'. Bill Murray struggles under the onus of being this camp's Hawkeye Pierce, needing to be 'wacky' in nearly every scene. I smiled once, I think, catching sight of a cochroach leaving the theater.

The first of a long line of collaborations between Harold Ramis and Bill Murray, this is the original film that started the camp genre that jettisoned through the eighties. Murray plays a goofy authoritarian figure who understands the kids, but works against the administration. The camp counselors are over-sexed teenagers, and their charges are big eyed sweethearts like newcomer Chris Makepeace. The film is a very watered down kind of comedy that relies on the goofball antics of Murray and the charisma of bikini babes. The film is very sweet when dealing with the relationship between Murray and Makepeace, but otherwise the counselors seem to see their charges as annoyances. There are also relationships between the teenagers, which is where the teenage sexual fantasy aspect comes from. It's a pretty harmless, sweet comedy that has lingered in the collective consciousness for the pure reason that it's Murray at his peak goofiness.

[img]http://images.rottentomatoes.com/images/user/icons/icon14.gif[/img] Meatballs is by no means, an Ivan Reitman/Bill Murray classic. However, it has got quite a few funny moments and an energetic Murray leading the camp. The best thing about it though, was that I had a smile on my face that never faded away when I was watching it.

An hilarious camp comedy starring Bill Murray, as Tripper, a camp counselor at Camp Northstar who acts like a kid himself and bonds with the other kids. Lots of memorable characters such as Rudy, the shy kid that no one wants to bother with but Tripper, Spaz, who is unlucky with the ladies, Morty, the counselor that everyone tortures and also the crazy romances between Candace and Bobby aka Crockett, A.L. & Wheeler, Spaz and Jackie and who could forget Roxanne and Tripper, and with all the battling between Camp Northstar and Mohawk you'll definitely want that second serving of meatballs! :) :) :) :)