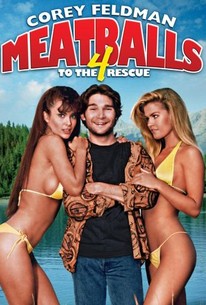 Nearly identical to the first two installments in the Meatballs series, the fourth is set around a summer camp fighting for its life. Here, though, a water-ski instructor (Corey Feldman) needs to stop a greedy developer from a rival camp (Sarah Douglas) who is trying to take over his Lakeside Water Ski Camp.

Imagine one of the worst comedies ever made. And then put Corey Feldman in it.

There are no featured audience reviews yet. Click the link below to see what others say about Meatballs 4!