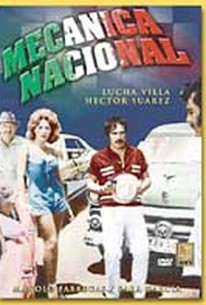 The humor in this Mexican social comedy has more to do with the aptly depicted characters shown than with the story. When Enfermio (Manolo Faregas) takes his family on an outing, he encounters every possible calamity. A group of unconnected lotharios almost romance his wife and his daughter away from him, he encounters a military man who is a little too ready to draw his gun at the slightest provocation, and his mother manages to eat herself to death. This last event leads to a macabre drive through town, as he takes his family, including the propped-up corpse of his mother, back home. ~ Clarke Fountain, Rovi

National Mechanics makes observations about reality but it also satirizes stereotypes of the Golden Age of Mexican cinema that, of course, contributed in large measure to perpetuating certain behaviors. [Full Review in Spanish]

Despite all its flaws, National Mechanics is worth watching. [Full Review in Spanish]

There are no featured reviews for National Mechanics (Mecanica nacional) at this time.