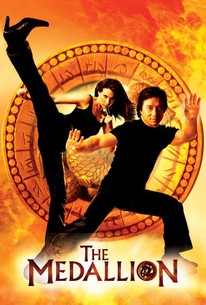 Critics Consensus: The use of special effects diminishes some of Chan's appeal in this disposable picture.

Critics Consensus: The use of special effects diminishes some of Chan's appeal in this disposable picture.

Critic Consensus: The use of special effects diminishes some of Chan's appeal in this disposable picture.

Cop Eddie Yang (Jackie Chan) and his partner, Interpol agent Arthur Watson (Lee Evans), are in pursuit of international human-smuggling crimelord Snakehead (Julian Sands). The partners get seriously wounded and a mysterious ancient medallion transforms them into superpowered warriors called Highbinders. The two halves of the medallion are supposed to grant eternal life when joined together by a powerful young boy who was born during a specific time in the Year of the Snake. The villainous Snakehead wants to gets his hands on both the child and the medallion, and the heros try to stop him. Aided by special effects and action choreography by Sammo Hung, Chan fights his way toward a violent conclusion with Snakehead that takes place in mid-air.. Claire Forlani plays Jackie Chan's love interest, the Interpol agent Nicole. ~ Andrea LeVasseur, Rovi

Howard Gibbins
as Professor of Archeology

Critic Reviews for The Medallion

It's a lame slapstick actioner in which Jackie Chan lets CGI effects take the heat instead of his arthritic joints.

A special-effects bonanza, and a woefully underwhelming one at that.

Makes you long for Tucker -- and for Jackie Chan to fly without digital wings.

This outing, Jackie doesn't bring much humor or personality to his role.

One of the Peking Opera-trained superstar's most mediocre films, rivaling last year's God-awful The Tuxedo for sheer messy filmmaking and brazen acts of tedium.

Probably the worst Jackie Chan vehicle to come around in his career...

With smooth, energetic direction by Gordon Chan and a love interest in the beautiful Claire Forlani, The Medallion shapes up as one of Jackie Chan's best American films.

The Medallion is an honest machine for making money, a meritorious entrepreneurial model.

... enough distractions to carry us through the doldrums.

For Jackie Chan... the moment of truth may have finally come. Nearly 50... the undeniably engaging star may be near the end of his shelf life as an action figure.

Audience Reviews for The Medallion

I do love Jackie Chan, but this movie was not as good as I expected to be.

The Medaillon. I tried so hard to watch this Movie to end but it just bored me.

I was completely surprised at this one. I enjoyed Jackie Chan and Lee Evans together. I laughed alot and had all the Jackie Chan great moments.