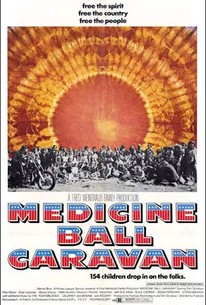 Medicine Ball Caravan is a scaled-down Woodstock-ish rock concert documentary. Director Francois Reichenbach followed a large troupe of performers known as the Caravan as they made a nationwide tour in 1970. The avowed purpose was to preach a doctrine of Peace and Love, but most people came to "groove." Among the featured performers are Alice Cooper, B.B. King and Doug Kershaw. Martin Scorcese, who'd previously been a co-supervising editor on Woodstock, both edited and functioned as associate producer of Medicine Ball Caravan.

They are limited by that available footage and at the mercy of moments lost to them, but it is a commendable effort. That the film and the journey were not a disaster may ultimately be the best praise possible.

There are no featured reviews for Medicine Ball Caravan at this time.