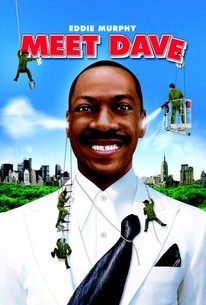 With their home planet in danger and no place in the known universe to seek shelter, a desperate crew of miniature alien humanoids boards a human spacecraft in hopes of saving their doomed world. Eddie Murphy stars in a sci-fi comedy that re-teams the longtime comic actor with Norbit director Brian Robbins.

Gabrielle Union
as No. 3

Pat Kilbane
as No. 4 - Security Officer

Jane Bradbury
as No. 81 Female Crew

Justin Robbins
as What the Boy

Michael Langston
as Make Out Guy

Kristen Connolly
as Make Out Girl

Roger E. Reid
as Stand in for mr. Murphy

Mike O'Malley
as Knox
View All

The new film is mildly amusing family entertainment, but when discussing the career of one of our most seasoned comic actors, "mildly amusing" can only be regarded as a letdown.

There's a delicious irony to the way in which this supposedly heartwarming comedy gives the impression of having itself been devised by a race of extra-terrestrials with only a tentative grasp of what constitutes heart or humour.

The puzzler that is Eddie Murphy's career continues apace with this low-fi kiddy-oriented affair featuring the comedian as both a human-shaped spaceship called Dave Ming-chang and the commander of said vessel.

This is made-for-TV material dressed up by Eddie Murphy's participation into a theatrical release.

Better than average but not worth phoning home about.

A disappointment from an actor who has recently shown the world he's capable of mighty fine acting.

I might even go out on a limb and actually say that Meet Dave is, um, good.

I'm sure a more refined filmmaker could've squeezed the premise tighter for sophisticated laughs, but as family-angled sci-fi comedies go, Dave is actually quite agreeable. Who knew Murphy still had some fun left in him?

A comedian known for his brash wit and go-for-broke charm, Murphy used to be willing to say anything to get a laugh. Now, he's clearly willing to do anything.

...one could certainly do much worse as far as Murphy's family-friendly output goes.

[img]http://images.rottentomatoes.com/images/user/icons/icon13.gif[/img] If it didn't depend on dozens of cliche's I might have actually enjoyed it. There are some funny moments in Meet Dave but still it's an odball, unoriginal and kind of creepy movie. It's not terrible, it's not as bad as Daddy Day Care or Norbit but it's still highly average and a massive misfire for children's taste due to some scary moments and a considerable amount of violence.

Very funny and endearing childrens film, pity it was only in the theaters for about 2 weeks

A very funny Movie Far More then I expected. I laughed all through the movie. Eddie Murphy played an excellent part. Elizabeth Banks was simply beautiful. A great family movie, nothing that can be shown to any age, clean throughout. 4 1/2 stars

Eddie murphy's movies always seem like yes there ok but you probably won't remember them in the long run! eddie murphy gives his same old predictsable effort into this, this movie is ok and watchable but dont bother going out of your way to watch it! Its a funny little kids movie, that is entertaining just incredibly predictable that is a bit boring!