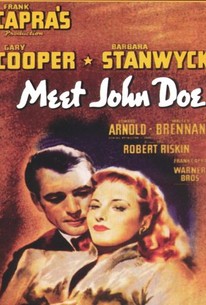 The first of director Frank Capra's independent productions (in partnership with Robert Riskin), Meet John Doe begins with the end of reporter Ann Mitchell's (Barbara Stanwyck) job. Fired as part of a downsizing move, she ends her last column with an imaginary letter written by "John Doe." Angered at the ill treatment of America's little people, the fabricated Doe announces that he's going to jump off City Hall on Christmas Eve. When the phony letter goes to press, it causes a public sensation. Seeking to secure her job, Mitchell talks her managing editor (James Gleason) into playing up the John Doe letter for all it's worth; but to ward off accusations from rival papers that the letter was bogus, they decide to hire someone to pose as John Doe: a ballplayer-turned-hobo (Gary Cooper), who'll do anything for three squares and a place to sleep. "John Doe" and his traveling companion The Colonel (Walter Brennan) are ensconced in a luxury hotel while Mitchell continues churning out chunks of John Doe philosophy. When newspaper publisher D.B. Norton (Edward Arnold), a fascistic type with presidential aspirations, decides to use Doe as his ticket to the White House, he puts Doe on the radio to deliver inspirational speeches to the masses -- ghost-written by Mitchell, who, it is implied, has become the publisher's mistress. The central message of the Doe speeches is "Love Thy Neighbor," though, conceived in cynicism, the speeches strike so responsive a chord with the public that John Doe clubs pop up all over the country. Believing he is working for the good of America, Cooper agrees to front the National John Doe Movement -- until he discovers that Norton plans to exploit Doe in order to create a third political party and impose a virtual dictatorship on the country. The last of Capra's "social statement" films, Meet John Doe posted a profit, although Capra and Riskin were forced to dissolve their corporation due to excessive taxes.

Walter Brennan
as The Colonel

John B. Hughes
as Radio Announcers at Convention

Lucia Carroll
as Herself

Hank Mann
as Ed, a Photographer

Harry Davenport
as Ex-owner of Bulletin

Jack Richardson
as Man in Diner

The Santa Clause, Misery, and More Available to Stream on Netflix and Amazon Prime

A smooth. Capracareful film replete with social preachment and a magnificent portrayal by Gary Cooper.

The movie is superb, dynamic, masterful. [Full review in Spanish]

Like Stewart's Mr. Smith, Gary Cooper's acting choices, while more subtle than Stewart, deeply connect you with his character's plight and therefore solidly hook you into hopes for his happy ending, his redemption.

It's a stronger and far less dated film than his overpraised It's a Wonderful Life.

[VIDEO ESSAY] Wikipedia lists "Meet John Doe" as an "American comedy film." How wrong they are.

Journalistic ethics are only a small aspect of the film, but the implications are long-ranging.

Capra's films work because he believed with his whole heart in his cornball agendas.

It's pure Capra, run through with the tension between idealism and corruption...

...the political and social ramifications are just as topical today as they were seventy years ago.

Capra's political parable is problematic parables, from his contradictory approach to the "little people" to the right-wing elements to the compromised ending, in which Cooper is stopped from committing suicide.

It was hard to stomach.

Capra, with his immigrant's love of the American dream, can easily be criticized as sometimes syrupy but never as simplistic. Here he grapples with no less than updating the tale of the Christ, making a modern day fable (well, as modern as 1941) of one guy sacrificing himself for the greater whole of humanity. Coop is great as the simple man drawn into corruption and seeking redemption. Walter Brennan shines as his friend, a crazy homeless guy and the sanest man in the film, James Gleason is perfect as the common sense common man, and Barbara Stanwyck lights the proceedings as the too smart regular gal, unaware that she needs saving as much as anyone. Just fine, nuanced filmmaking!

Another Capra masterpiece that is still relevant today. Cooper and Brennan are great.

This is a remarkable movie, and a great performance from Stanwyck. I highly recommend this movie.

Fantastic! It started off as what I thought was going to be a screwball comedy but slowly shifted gears into a heartbreaking tale of beauty and political corruption. Gary Cooper's performance was a bit stiff and Barbara Stanwyck was as always amazing. The convention and final sequences had a look to them that was nothing short of chilling. The dialogue's a bit dated but the story is timeless. And again, Frank Capra succeeds in getting me all misty.