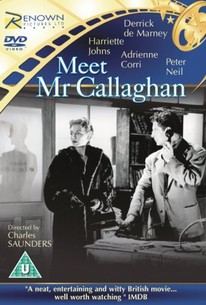 Slim Callaghan, a fictional British private detective in the American "hard boiled" mode, was the central character in several popular Peter Cheyney novels, in a stage play by Gerald Verner, and in the 1948 movie programmer Uneasy Terms, which top-billed Michael Rennie. Meet Mr. Callaghan stars Derrick DeMarney, no stranger to detective films, in the title role. In this "pilot" for a proposed Callaghan movie series, Slim is required to solve the death of a much-hated rich man. Meet Mr. Callagahan made money (no surprise, since it cost practically nothing to make), but no sequels resulted. In the late 1950s, however, a French-made group of Slim Calaghan pictures went on the market, starring Eddie ("Lemmy Caution") Constantine. ~ Hal Erickson, Rovi

There are no critic reviews yet for Meet Mr. Callaghan. Keep checking Rotten Tomatoes for updates!

There are no featured reviews for Meet Mr. Callaghan at this time.