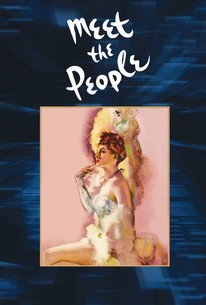 MGM's musical extravaganza Meet the People top-bills two future powerful TV executives: Dick Powell and Lucille Ball. Ball plays a popular but stuck-up Broadway star who leaves the bright lights to become a welder in a shipyard. Here she meets and falls in love with coworker Powell. This being a wartime musical, the plotline is periodically abandoned for the guest-star turns of the likes of Virginia O'Brien, Bert Lahr, Spike Jones and His City Slickers, Vaughn Monroe, and Mata and Hari. Buried beneath this cornucopia of corn is a stage play by Louis Lantz, upon which Meet the People was supposedly based. (Note: some sources mistakenly list Edward Dmytrk as the director of this film).

Bert Lahr
as The Commander

Mata and Hari
as Oriental Dancers

Vaughn Monroe
as Himself

Critic Reviews for Meet the People

There are no critic reviews yet for Meet the People. Keep checking Rotten Tomatoes for updates!

Audience Reviews for Meet the People

There are no featured audience reviews yet. Click the link below to see what others say about Meet the People!