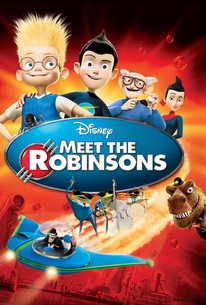 Critics Consensus: Meet the Robinsons is a visually impressive children's animated film marked by a story of considerable depth.

Critics Consensus: Meet the Robinsons is a visually impressive children's animated film marked by a story of considerable depth.

Critic Consensus: Meet the Robinsons is a visually impressive children's animated film marked by a story of considerable depth.

An orphan who dreams of someday finding a family to call his own finds his fate taking an unexpected turn when a mysterious stranger named Wilbur Robinson transports him into the future. Based on the book A Day With Wilbur Robinson by William Joyce, Meet the Robinsons tells the story of a boy with a lifelong wish to belong, and shows what happens when he meets an incredible collection of characters who just might have the power to make his wildest fantasies come true. The film's all-star cast of vocal contributors -- including Angela Bassett, Kelly Ripa, Tom Selleck, Adam West, Steve Zahn, and Laurie Metcalf -- brings the world of the future to life as never before seen on the silver screen. ~ Jason Buchanan, Rovi

News & Interviews for Meet the Robinsons

View All Meet the Robinsons News

Critic Reviews for Meet the Robinsons

The animation strives for 1950s sci-fi retro, but the result is that everyone looks like a plastic animé doll.

What might have been a bland Back to the Future rip-off suddenly hums with a screwball sensibility chockablock with singing gangster frogs and evil bowler hats.

Whether you see this loony, feel-good comedy in 3-D or in regular vision, it's a lot of fun.

Loosely based on a children's book by William Joyce, the film does a lot of twiddling with time.

There's no doubt Disney will do it again, and perhaps better next time, but for now, it looks like technology could be its creative salvation.

The first 20 minutes of this competently animated kids' adventure are entertaining enough. But thereafter, the plot fractures, the pace goes into overdrive and the jokes wear thin.

With innovation, creativity, and heartfelt storytelling, this is solid entertainment for audiences of all ages.

It's not a big deal, I know, but we can always console ourselves thinking it could have been much worse. [Full Review in Spanish]

"Robinsons" features a nice story (even if it took seven screenwriters) and a compelling visual look that makes it a cut above other animated films in 2007.

This is not a masterpiece but as pop entertainment it is creative and bizarre and I liked it.

Meet the Robinson tasted like chicken - Chicken Little, that is.

Flashes of wit and whimsy notwithstanding, the future is just as sentimentalized as the past.

Audience Reviews for Meet the Robinsons

Not an absolutely terrible addition to the kiddies animation canon, an orphan is transported to the future in hopes of finding the family he's never had. Only for the kiddies. The writing's flawed, the charaterization weak, the plot predictable. But it's not terrible.

Considering it's a Disney movie that always have their bar set high the second you realise the animation in Meet the Robinsons is amazing you are at the same time realising that the stroy is boring. You are absolutely correct. A fantastic example of how modern disney films are destryoing the once legendary empire. Apart from the animation and a considerable amount of animation it is weird, forgettable and just plain bad.

I quite liked 'Meet the Robinsons'. It wasn't a classic, memorable, or perfect film, but it was indeed a very good children's film. I will admit, there are times where it is a little too cute for itself, but it is made up by fine animation, as well as a witty script which all make this an acceptable yet forgettable film.

I liked this movie. Was really fun and my daughter really enjoyed it as well. Decent voice acting, A nice story make this a good film for kids.