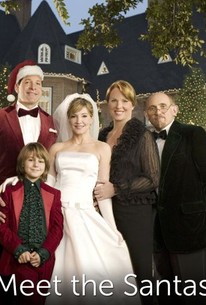 In this sequel to the extraordinarily popular 2004 cable movie Single Santa Seeks Mrs. Claus, Steve Guttenberg returns in the role of Nick, son of the soon-to-be retired Santa Claus (John Wheeler) and heir to the North Pole toyshop. Likewise, Crystal Bernard repeats her characterization of Beth Sawtelle, the widowed mom who has agreed to marry Nick so that his "destiny" will be fulfilled. Nick and Beth have only four days before the Christmas Eve deadline to tie the knot, lest the Santa Claus Legacy crumble into dust. Unable to handle the wedding plans herself, Beth makes the tactical error of turning to her society-doyenne mother Joanna (Mariette Hartley) for help--and as it happens, Joanna just plain despises Nick, and isn't about to let her daughter marry "beneath her station" (Nick of course could solve the problem by revealing that his dad is Santa Claus. . .if only Joanna believed in Santa Claus!) Also returning from Single Santa Meets Mrs. Claus are Armin Shimerman as the Senior S.C.'s head elf Ernest (who prefers the title "executive assistant") and Dominic Scott Kay as Beth's son Jake. Making its television debut on December 17, 2005, Meet the Santas broke the record set by its predecessor, posting the highest-ever ratings for a Hallmark Channel movie.

Critic Reviews for Meet the Santas

There are no critic reviews yet for Meet the Santas. Keep checking Rotten Tomatoes for updates!

Audience Reviews for Meet the Santas

Such a cute movie.