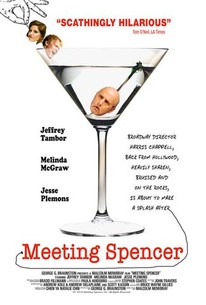 A celebrated Broadway director finds his life turned upside down while attempting to raise funding for his big comeback in this contemporary screwball comedy starring Jeffrey Tambor. Harris Chappell (Tambor) wasn't made for Hollywood. When his movie career hits the skids, he hightails it right back to Manhattan. Harris is convinced that he can recapture his status as one of Broadway's leading directors, and heads straight for Frankie & Johnnie's for a meeting with his ex Didi (Melinda McGraw) and a talented young actor named Spencer (Jesse Plemons). All Harris needs is one unqualified hit to re-launch his career, but as the night wears on nothing goes as planned, both his resolve and his sanity gradually begin to erode. ~ Jason Buchanan, Rovi

Markus Flanagan
as Man in Bar

Meeting Spencer is comprised mainly of actors talking, yet it's funny in that continuous smile kind of way that you don't notice until you're half way through it

Mowbray has some fine credits, including "A Private Function," but he and his cast cannot breathe life into such hopeless material.

A screwball comedy without nearly enough zest or wit.

At best a sporadically amusing sketchbook of theater types.

Isn't quite savvy enough to compete with the slyest entries in that genre or madcap enough to run with the zaniest.

Within the confines of its stagy artificiality, the thesping mostly rings true.

The material Mowbray's film is familiar and the characters are thin, but the dialog is crisp and witty.

This claustrophobically unfunny conceit begs the question: Is there anything worse than failed theatrical farce onscreen?

A touch of class and sweet sophistication with a brilliantly funny cast. Definitely an indie sleeper worth checking out.

A funny and deft portrait of the self-absorbed world of those involved in creating Broadway plays.

This painfully unfunny comedy set in the theater world is no All About Eve.

Like many a movie about a play about a play, Meeting Spencer doesn't have much to say for itself other than all the world's a stage.

There are no featured audience reviews yet. Click the link below to see what others say about Meeting Spencer!