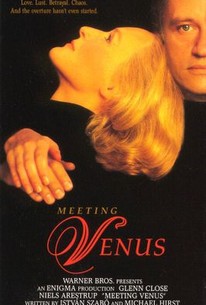 Meeting Venus is based on a play cowritten by the film's director, Istvan Szabo. Glenn Close plays a celebrated Swedish opera star Karin Anderson who is slated to appear in an internationally-telecast production of Tannhauser. Ms. Anderson balks at the notion of working with obscure Hungarian conductor Zoltan Szanto. The much-anticipated production may never get off the ground, thanks to labor-management difficulties, intramural jealousies, and clashing egos. Admidst all this chaos, the mismatched Anderson and Szanto fall in love. Filmed in Budapest, Meeting Venus was far from a box-office hit thanks in great part to an inadequate advertising campaign; hopefully it will gain the wide audience it deserves on videocassette. (PS: Glenn Close's singing is dubbed by real-life opera luminary Kiri Te Kanawa. We tell you this because the lyp-synching is done so well that you might actually believe that Close is performing those arias herself).

Zsuzsa Manyai
as Fat Lady from the Chorus

Renate Springler
as A Young Shepherd

Matthia Holle
as The Landgrave

Better at the edges than the center -- the story is weak, but there are wonderfully vivid, wise, and witty moments and some insight into the multi-cultural challenges of a huge musical undertaking.

There are dozens of major and minor characters in the film, and Szabo juggles them artfully, telling some of their stories and transient flirtations in asides and background action.

There are no featured reviews for Meeting Venus at this time.