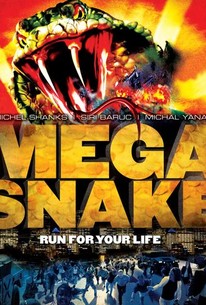 A man is forced to overcome his lifelong fear of snakes in order to protect his town from a mythical serpent that is growing at an alarming rate and swallowing up anything and anyone who happens to cross its slithering path. Les Daniels was just a young boy when his father was bitten and killed by an extremely poisonous snake. Years, later, Lee is still petrified of snakes. When Lee's brother inadvertently releases an extremely deadly serpent that was feared by ancient cultures, the one person with the power to defeat the creature is the same one who fears it most. Now trapped in a terrifying situation and forced to confront his painful past, Lee boldly sets up to stop the Meg Snake before it's too late.

Stanimir Stamatov
as Cop No. 1

Michal Yannai
as Fay
View All

There are no critic reviews yet for Mega Snake. Keep checking Rotten Tomatoes for updates!

A very bloody, cheesy, and yet so-bad-that-it's-funny SyFy film. Possibly my favorite of the SyFy Channel.

Daft and delightful big animal romp. The performances are all delivered with a wink-and-a-nudge along with suspiciously bad dialogue (probably written that way). One line of dialogue is reminiscent of something from Ed Wood's films. "He's dead!?" "Extremely". The special effects aren't too shabby, and the film pulls a few surprises, such as a poorly put together couple trying to deal with their problems, people looking like they are about to escape and then snubbing it etc. There's some mumbo jumbo about Native American folklore, which is a tad silly, but makes a change from the usual genetically modified snakes. This makes it man vs. nature in its purest form, and not man's mistake. If you like big snake movies you wont be disappointed by the number of cliches and some of the deviations from the norm.