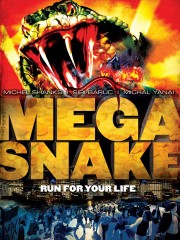 Curtis C
½ May 19, 2019
A one star stinker on many levels. The CGI is terrible. Plot is predictable and weak. A lot of hollywood divisive PC: The indian is a strong, intelligent character (Even though he is a pagan); all the white men are weak & shallow; the female lead is strong, intelligent, and insightful (She even uses the liberal mindset that degrees, certificates, certifications are proof of importance...). Loads of liberal brainwashing propaganda... It will leave you angry if you have any belief in honesty and integrity...

Abdul R
½ March 17, 2019
Illogical, bad acting and directing made this probably one of the worst movies.

Raffy John M
January 28, 2013
Nice plot but the way it was presented was not good.

Wes S
½ March 18, 2012
The CGI is typical low grade for a Sci-Fi channel movie, but the story and characters aren't really that bad. Decent humor but some stupid scenes, plot is a bit similar to Gremlins.. It wasn't what I was expecting and I actually enjoyed it a bit.

Super Reviewer
Jacob P
May 31, 2011
A very bloody, cheesy, and yet so-bad-that-it's-funny SyFy film. Possibly my favorite of the SyFy Channel.

Super Reviewer
Luke B
½ February 13, 2011
Daft and delightful big animal romp. The performances are all delivered with a wink-and-a-nudge along with suspiciously bad dialogue (probably written that way). One line of dialogue is reminiscent of something from Ed Wood's films. "He's dead!?" "Extremely". The special effects aren't too shabby, and the film pulls a few surprises, such as a poorly put together couple trying to deal with their problems, people looking like they are about to escape and then snubbing it etc. There's some mumbo jumbo about Native American folklore, which is a tad silly, but makes a change from the usual genetically modified snakes. This makes it man vs. nature in its purest form, and not man's mistake. If you like big snake movies you wont be disappointed by the number of cliches and some of the deviations from the norm.

Hammer C
August 11, 2010
A modern marvel of monster films. This movie pushes the bar on the movie industry. Between the deep twisting story and probably one of the greatest messages of all time this is easily the greatest film of the century. Find this movie and buy it. It is a once in a lifetime opportunity it is a must see.

Justin G
July 9, 2010
Megasnake was a low budget B movie with poor special effects and acting. But the movie was so stupid, I actually got entertained by it. Megasnake is not a critically claimed movie. but it's so stupid that it would gave me laughs.

Joe L
May 2, 2010
I rather enjoyed watching this film twice! It had poor special effects but a good movie in my opinion. I would try and buy this movie one day.

Bobby L
February 10, 2010
"I have a PhD in Zoology, and I know a lot about animals, snakes in particular, and this is definitely the work of a giant snake." - Erin, Deputy.

Now, far be it from to question why a doctor became a cop, but why the hell did she become a cop?

Another question, as well, if I may- why are small town sheriff's the world's biggest, dumbest, most retarded people to ever exist? The one in this movie is seconded only by the partying cop from Cabin Fever, as persons who shouldn't be allowed to handle a rubber band for fear they'd cut themselves on it, much less any real weapons.

Why do they never believe the ones qualified to know about these things, and accuse the ones who discover it, despite that it's obvious no mere human could cause such havoc?

I think had the sheriff not been in this, I would have enjoyed it a bit more. The acting was subpar, but passable. The pace was decent, and the script had plotholes coming out of it's ears, which makes for some fun viewing. The special effects are truly terrible, and I mean terrible by any standards. Looks as if they simply used the pre-viz version and never finished it.

I was laughing and enjoying lots of this, but dammit, that freaking sheriff ruins everything! I am sick of those sorts of characters.

Jason D
January 23, 2010
In Mega Snake, deep in the heart of Europe...um...I mean random American hillbilly territory, a family of religious snake handlers live (and die) by the snake, save for son Michael Shanks (of Stargate fame) who watched his father get killed by a snake at church. Now, as an EMT, he tends to avoid them, but not good old brother Duff (John T. Woods), who gets his snakes from the local Native Tattoo artist. On one particular visit, Duff steals a tiny snake said to be very rare and deadly towards people. After being given a set of Gremlins-esque rules, Duff proceeds to break them all, and with everything that snake eats, the larger it grows until it becomes Mega Snake. Can Shanks get over his fear of snakes and conquer Mega Snake before it eats all the European actors....um...I mean American, English-speaking (not dubbed at all. Oh no sir!) actors. Directed by Tibor Takacs (The Gate films), I expected Mega Snake to be the fun, campy schlocky nature run-amok film I thought I was getting myself into, but Mega Snake wound up being Mega Suck. The movie has some engaging moments, and even a couple of great unintentional laughs, but it's hard for me to appreciate a film that cannot do a better job of convincing me it's not being made deep in Europe with a foreign cast and crew trying to play it off like it's all made in America. Gosh, I know that sounds moronically conservative, but it genuinely threw me off. While this film sports a quasi-big Stargate character, as well as rising genre actor Todd Jenson (Wrong Turn 3, Train, It's Alive remake), I'm guessing one of the bigger marquee names was the appearance of Matthew Atherton. Atherton is best known as a contestant on the dreadful Who Wants to be a Superhero, where his superhero name was Feedback. It is with great disappointment that I inform you that Feedback does NOT get taken down by Mega Snake (which would have caused for higher marks on the film's rating), but in fact, Feedback does get to be a small hero in the film. Bleh.

Russell G
October 8, 2009
Stupid white man no listen to the original people, and break jar with mega-snake in it. Mega-Snake make great magic, and grow mega-big, then eat people.... this one sucked. Where's Mega-Shark when you need him?

Nick B
½ July 18, 2009
For what it's worth, Mega Snake is a hell of a lot of fun. Overly gory action, piss poor acting, and CGI worthy of 1993, the film has the trifecta of baaad that makes it oh so good. Factor in the absurd story setup, the cheeseball delivery of dialogue, and the awful, mismatched audio dubbing, this kind of movie should obviously be a social event rather than a serious viewing experience.

Caz R
June 5, 2009
Was a lot better than I thought it would be! Predictable plot and some ropey CGI but it was quite entertaining

Cherie N
April 12, 2009
This is actually not bad for a B flick. Michael is hot, everything is shot is the most amazing intense colours, some hilarious stock characters, and the story made a certain amount of sense (for a B movie). Pity about the snake...