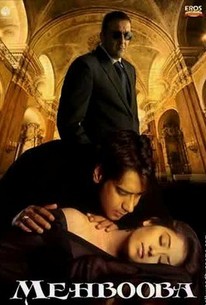 As directed by Azfal Khan, the Bollywood outing Mehbooba concerns Shravan Dhariwal, a self-important entrepreneur and playboy living a carefree lifestyle in Manhattan. Given his oversized bankroll, it requires no effort for him to win almost any woman he chooses - until Varsha turns up. One of a different stripe, she holds honesty, decency and integrity highest on her list of priorities and cares much less about wealth than other women. This prompts Shravan to admit that he's fallen deeply and genuinely in love for the first time - which leads to a passionate romance and a marital engagement to Varsha. That all comes crashing down, however, with Shravan's appalling admission that he only feigned falling in love to con Varsha into bed. Understandably humiliated, she flees from Shravan - only to shock him by turning up later, with another prename, as his brother Karan's bride. ~ Nathan Southern, Rovi

This [is an] endless pile of clichés.

There are no featured reviews for Mehbooba at this time.