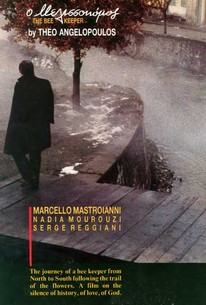 In this compelling drama, Marcello Mastroianni gives a tour-de-force interpretation of a disillusioned middle-aged man, a bee keeper who inherited the passion for his vocation from his father. After weeping silently at the end of his daughter's wedding ceremony, Spyros (Mastroianni) leaves in his truck to check on his bee hives and in the process gets involved with a winsome young hitchhiker (Nadia Mourouzi). She makes some advances which he immediately rejects, yet it is clear that he is ambivalent about her. Next he pays his respects to the people who have meant something to him in his life: his ex-wife, an old friend, and his daughter. Each time he mysteriously truncates his visit, and the enigma of what lies unsaid deepens after he encounters the hitchhiker again. ~ Eleanor Mannikka, Rovi

Nadia Mourouzi
as The Girl

The most accessible Angelopoulos you can reach.A terrific intermezzo sequence in between the laboring of the protagonist and his suppressed sexuality.Memories and evoking scenery,there's certainly a poetic homage to natural distraction.The tumultuous landscape of Greece serves as a paleolithic,facial doorknob.Outcasts are not allowed here.