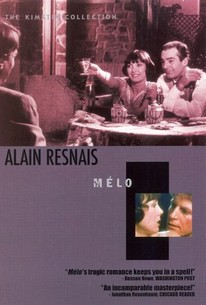 Director Alain Resnais faithfully adapted his script for Melo from a 1929 play by Henry Bernstein--the first time that Resnais handled his own screenplay. Violinists and lifelong friends Pierre Arditi and Andre Dussolier have each found happiness in adulthood, but only Dussolier has become famous. Ardati leads a contented life with his wife, Sabine Azema, little suspecting that she is enamored of Dussolier. An abortive plan to murder her husband leads to Azema's suicide, but Ardati remains blissfully unaware of her infidelities. When the truth is revealed to Ardati, Dussolier honors the memory of Azema by insisting that no illicit romance ever occurred. One of the more "linear" of Resnais' works, Melo, filmed in 1986, was given a general American release three years later.

Catherine Arditi
as Yvonne
View All

Resnais invests the original meaning of "melodrama" (drama with music) with exceptional beauty and power, cutting and moving his camera with impeccable dramatic logic to give their performances maximum voltage.

s he grew older, Alain Resnais revealed the wistful sentimentalist behind the formalist pathfinder of Hiroshima Mon Amour and Muriel.

What's miraculous about Mélo is that the material never grows hysterical and feels blocked in or trapped by the stage.

It dishes out dollops of pain from among the Brahms' sonatas, and melodramatics that were dated long ago.