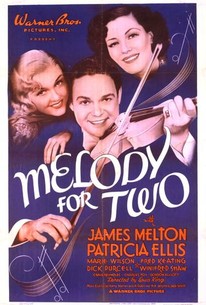 Operatic tenor James Melton stars as on-the-skids bandleader Tod Weaver, who finds himself in charge of an all-girl orchestra. Though he tries to remain oblivious to his musicians' charms, he can't help but fall in love with assistant conductor Gale Starr (Patricia Ellis). Things look bad for hero and heroine when seductive Lorna Wray (Winifred Shaw) comes between them, but Tod is brought back to earth with a well-aimed slap. The cast of Melody for Two contains some potent comedy talent, including Marie Wilson and Eddie "Rochester" Anderson, but the spotlight is on the golden-throated James Melton. The film's one memorable song is "September in the Rain," later hilariously re-created in the "Looney Tunes" installment Porky's Preview (1938). ~ Hal Erickson, Rovi

William B. Davidson
View All

Critic Reviews for Melody for Two

There are no critic reviews yet for Melody for Two. Keep checking Rotten Tomatoes for updates!

There are no featured reviews for Melody for Two at this time.