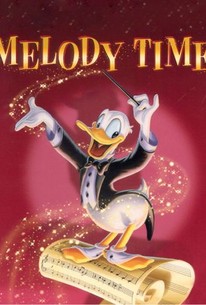 Disney was known for combining his musical cartoon shorts into interesting feature-length anthologies and Melody Time is one of the best. But for the fact that all of the featured segments have musical themes, they vary widely in musical and artistic style. Included are the exciting "Bumble Boogie," with a jazzy version of Rimski-Korsakov's famed "Flight of the Bumblebee," played by Freddy Martin and His Orchestra; the legend of Johnny Appleseed, "Little Toot," the story of a courageous tug-boat narrated by the Andrews Sisters; "Trees," based on Joyce Kilmer's poem and featuring songs by Fred Waring and His Pennsylvanians; "Blame It on the Cowboys," featuring Ethel Smith kicking up her heels with Donald Duck and his Three Caballeros pal Joe Carioca, and cowboy stars Roy Rogers and the Sons of the Pioneers in a live-action/animated retelling of the legend of "Pecos Bill."

Luana Patten
as Herself

Bobby Driscoll
as Bobby, Himself

Bob Nolan
as Himself; Singer; Narrator

Roy Rogers
as Himself; Narrator; Singer

The straight technical expertism is still one of the wonders of the movie world.

Like healthy, imaginative children, those Disney boys are full of strange caprice. One minute they are doing something charming; the next minute they are slopping in the jam.

A charming, imaginative anthology of cartoon shorts set to music by the likes of such '40s favorites as Roy Rogers and The Andrews Sisters.

This is very far from a perfect film, but in fits and starts it still provides that old-school Walt Disney magic.

It's sweet and well done so I enjoyed it.

This last musical compilation film from the Disney studios was also one of the best, and Disney's animators display their entire creative range.

A film much more entertaining than you'd expect, even if only two of its seven sequences individually reach classic status.

A slight improvement over Make Mine Music as another Disney package film combining music and narrative, now with seven stories that may not exactly be memorable but still manage to entertain, even after this run-of-the-mill anthology format has clearly become tired.

Number 5 of the Compilation Era Animation is top notch. The shorts are actually all great and while not the most memorable will still stay longer then most of the shorts of the era. Next up: Mr. Toad vs. The Headless Horsemen

Donald Duck is so cool