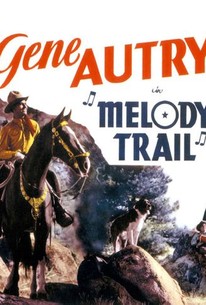 Gene Autry's second starring western for Republic was the well-named Melody Trail. Unlike Autry's inaugural vehicle Tumbling Tumbleweeds, which offered an equal blend of action and music, this second effort is virtually all music, with occasional comedy relief from Smiley Burnette. The story finally takes flight when a baby left in Gene's care is kidnapped, and travelling gypsy Frantz (Willy Castello) is suspected. All turns out okay, albeit with a minimum of fisticuffs and gunplay. The film's mass-wedding finale (an intriguing precursor to Seven Brides for Seven Brothers) features several lovely starlets who figure significantly in the storyline, the most prominent of whom is 18-year-old Ann Rutherford.

There are no featured reviews for Melody Trail at this time.