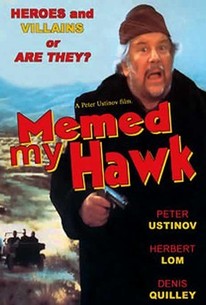 This disappointing, pretentious farce by writer and director Peter Ustinov, who also stars as the incompetent but powerful Abki Aga, is based on a novel by Yashar Kemal about Memed (Simon Dutton) a man who escapes into the Turkish hills with the woman he loves (Leonie Mellinger), a woman already betrothed to the nephew of the region's governor (Aga). Even though Memed joins a band of brigands he is not successful when he first tries to kill Aga, who lords it over five different villages and has a sizeable army, and so he tries again. Unfortunately, Turkey is not only the setting, but an apt descriptive term for this 105-minute film. ~ Eleanor Mannikka, Rovi

Critic Reviews for Memed My Hawk

There are no critic reviews yet for Memed My Hawk. Keep checking Rotten Tomatoes for updates!

There are no featured reviews for Memed My Hawk at this time.