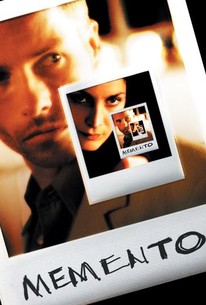 A man is determined to find justice after the loss of a loved one, even though he is incapable of fully remembering the crime, in this offbeat thriller. Leonard (Guy Pearce) is a man who is struggling to put his life back together after the brutal rape and murder of his wife. But Leonard's problems are different from those of most people in his situation; he was beaten severely by the same man who killed his wife. The most significant manifestation of Leonard's injuries is that his short-term memory has been destroyed; he is incapable of retaining any new information, and must resort to copious note-taking and Polaroid photographs in order to keep track of what happens to him over the course of a day (he's even tattooed himself with a few crucial bits of information he can't get along without). Leonard retains awareness that his wife was brutally murdered, however, and he's convinced that the culprit still walks the streets. Leonard is obsessed with the notion of taking revenge against the man who has ruined his life, and he sets out to find him, getting help from Natalie (Carrie-Anne Moss), who appears to be a sympathetic barmaid, and Teddy (Joe Pantoliano), who claims to be Leonard's friend, even though Leonard senses that he cannot be trusted. Writer/director Christopher Nolan adapted Memento from a short story by his brother Jonathan Nolan. ~ Mark Deming, Rovi

Marianne Muellerleile
as Tattooist
View All

Think of all the ways that a linear film structure stabilizes us - the cause and effect chain of events. But Memento is about a character completely destabilized, so Nolan destabilizes us accordingly in a way maybe no other movie has.

Memento would only be half as fun with only one gimmick or the other. Instead, the backward storytelling and the frozen man make for a wonderful pair, combining into something far more redemptive than it sounds.

I can't remember when a movie has seemed so clever, strangely affecting and slyly funny at the very same time.

Writer-director Christopher Nolan's second film is one of the most original and ultimately confounding mind games to reach the screen since The Usual Suspects.

The young British writer and director Christopher Nolan, who has every intention of putting us through the mill, doubles his fun by running the whole story backward.

The astonishing payoff takes the film to another level entirely, unleashing a battery of existential questions that shed new light on everything that precedes it.

Directed by Christopher Nolan based on a short story by his brother, Jonathan Nolan, this is an intellectual exercise that's unlike anything you've seen lately.

A nifty puzzle worth assembling. The film that put Nolan on the map. A psychological film noir breakthrough. [Full review in Spanish]

Although the plot itself isn't terribly complex, the editing is so labyrinthine that multiple viewings are almost certainly necessary.

The brain-teasing mystery put Christopher Nolan on the map as a filmmaking force...

Nolan's winding timelines and practical stunts are marvels to behold, but they seldom compare to the slow push-in on Leonard's face, as brief but powerful bursts of memory envelop the screen.

Christopher and Jonathan Nolan make a shocking and enticing story in Memento. From its unconventional formula of storytelling to the shocking revelations, the film is a landmark for the brothers as one of their bests and one cinemas groundbreaking tales. 5/5

An intellectually stimulating and expertly edited exercise in storytelling built upon two alternating threads that move in opposite directions (the main one backwards and a black-and-white subplot forward) until they converge in the end, making us undergo the same disorientation of its character.

I need to watch this again.

An ex insurance investigator with a medical condition that leaves him with no short term memory is hunting the killer of his wife with the aid of notes left to himself in the form of tattoos all over his body. Christopher Nolan's big budget debut is a stunningly original twist on the detective movie formula, telling the story of a man's quest for vengeance in reverse chronological order. This sounds like a very simple, almost obvious idea, but it is done with such beautifully engineered intelligence and subtlety that it keeps you guessing not only til the end of the film, but also til the end of each scene as you, along with Guy Pearce's obsessive investigator, try to link each jigsaw puzzle piece of the story together. It's one of those films that is ironically unforgettable, and my only wish is that I could erase MY memory and watch it for the first time again and again. Truly unique and quite, quite brilliant.