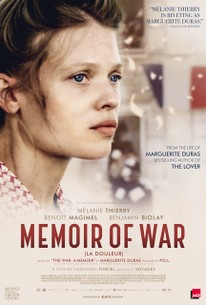 Critics Consensus: Memoir of War benefits from a magnetic performance by Mélanie Thierry, whose work is often enough to counter some of the film's fundamental flaws.

Critics Consensus: Memoir of War benefits from a magnetic performance by Mélanie Thierry, whose work is often enough to counter some of the film's fundamental flaws.

Critic Consensus: Memoir of War benefits from a magnetic performance by Mélanie Thierry, whose work is often enough to counter some of the film's fundamental flaws.

It's 1944, and Duras is an active Resistance member along with her husband, writer Robert Antelme, and a band of fellow subversives in Nazi-occupied Paris. When Antelme is deported to Dachau by the Gestapo, she becomes friendly with French collaborator Rabier (Benoît Magimel) to gain information at considerable risk to her underground cell. But as the months wear on without news of her husband, she must begin the process of confronting the unimaginable. Through subtly expressionistic images and voiceover passages of Duras' writing, Finkiel evokes the inner world of one of the 20th century's most revolutionary writers.

Duras's soul-stripping words are here, but little thought appears to have gone into translating them for cinema.

Buoyed by an astonishing central turn by Mélanie Thierry.

Pain, it turns out, can be unbearably dull.

Despite its pedigree, Memoir of War does not guarantee safe passage.

Resolutely somber, and self-aware about its deliberately tight and opaque visual style, it's presentational more than lived, a series of filmmaking choices instead of something deeply felt and conveyed.

The film is an admirable adaptation. Women have great stories to tell on screen.

It's a strong film addressing a common yet seldom dramatized wartime experience...

The film signals the arrival of another major French star actress. Memoir of War is a great film.

An overly simple retelling of a complex story.

The fact the film failed to convert any of its eight César nominations says much, but this still represents a bold bid to recreate a highly distinctive recollection of a unique time.

There are no featured audience reviews yet. Click the link below to see what others say about Memoir of War (La douleur)!