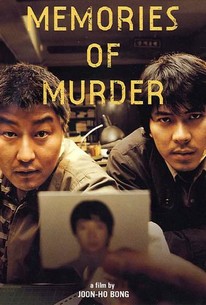 South Korea in 1986 under the military dictatorship: Two rural cops and a special detective from the capital investigate a series of brutal rape murders. Their rude measures become more desperate with each new corpse found.

News & Interviews for Memories of Murder

View All Memories of Murder News

Critic Reviews for Memories of Murder

Memories of Murder is precisely what you'd expect from Bong.

Tracing a long, frustrating, and at times darkly funny investigation into the crimes of a rural South Korean serial killer, Memories of Murder is a thrilling and stomach-churning ride.

Bong elevates every scene with his unbelievably assured filmmaking.

Memories of Murder is a great satire of official laxity and arrogance, and its final scene is very chilling.

Most telling of all is that tone, the slow, deep nuancing of what once felt cartoonish, the antic slapstick that suddenly turns sombre. With Bong, you never see what's coming. And then you're face to face.

How the hell does a film this tonally out there, with characters this lunkheaded and at times even cruel and hateful, manage to be so indescribably moving?

Memories of Murder looms large in Bong's filmography, one that has moved from a shadowy apparition to easily accessible.

Memories of Murder is an unsettling production with an atmosphere that lingers long after the credits roll.

It all combines to make a fascinating cinematic experience.

Audience Reviews for Memories of Murder

Bong Joon-ho uses a real Korean serial killer story as the basis for this always absorbing, terribly ironic and tragically hilarious crime drama that is both an intelligent social satire and a sharp political commentary, and he never ceases to surprise us until the very last shot.

A murder chronicle that engulfs you into its own mystique. A richly layered film with great cinematic devices, satirical and distant at first, desperate, elusive and suspenseful by the end.

"Do you see this kind of thing in Seoul often?" South Korea in 1986 under the military dictatorship: Two rural cops and a special detective from the capital investigate a series of brutal rape murder. Their crude measures become more desperate with each new corpse found. Based on a true case

REVIEW
Set in 1986, "Memories of Murder" chronicles the first serial killer case in South Korean history. The victims are all beautiful young women whose bodies have been found raped and strangled in local fields and ditches. The initial agents who have been put on the case are two incompetent bunglers - one a dropout from college, the other a dropout from high school - who seem to have gleaned the majority of their investigative techniques from cheesy TV crime dramas. Enter Seo Tae-yoon, a forensic investigator from Seoul, who wrests control from the locals and brings some big-city know-how to the case. Given the grim subject matter at hand, it's amazing just how funny so much of this movie turns out to be. Blessed with a sly sardonic humor and a willingness to make fun of its characters even while evincing a great deal of affection for them, "Memories of Murder" plays less like a conventional cop movie and more like a regional comedy filled with rich insights into the subtle truths of human nature. The relationship between Seo, the investigator from Seoul, and Park Doo-man, the more rational of the two local officers, is intriguing and complex, as we watch them bicker and brawl and engage in petty power struggles, while slowly coming to realize that each has something of value to teach the other if only they can set aside their egos long enough to listen. Saddled with even-then antiquated technologies, Seo and Park are forced to rely on good old investigative footwork and informed intuition to try and solve the case. There are strong performances by one and all, and a fine sense of atmosphere in the setting. Those looking for a neatly tied-up resolution to the case may find themselves disappointed at movie's end. But the rich rewards of setting and character should be compensation enough.

an excellent thriller based on the first known serial killings in korea. two small town detectives, plus one on loan from the big city of seoul, struggle to solve the case using decidedly low tech methods. the film also contains a good dose of humor which works surprisingly well. fans of the director's 2006 monster movie, the host (gwoemul) should check this out