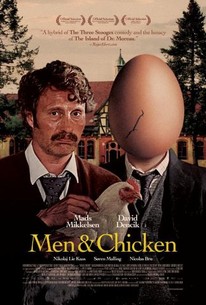 Critics Consensus: Men & Chicken's bizarre setup only skims the surface of a challenging, well-acted comedy with a warm heart to match its grotesque visuals and dark themes.

Critics Consensus: Men & Chicken's bizarre setup only skims the surface of a challenging, well-acted comedy with a warm heart to match its grotesque visuals and dark themes.

Critic Consensus: Men & Chicken's bizarre setup only skims the surface of a challenging, well-acted comedy with a warm heart to match its grotesque visuals and dark themes.

Men & Chicken is a darkly hilarious slapstick comedy starring Mads Mikkelsen ("Hannibal," ingeniously cast against type) about a pair of socially-challenged siblings who discover they are adopted half-brothers in their late father's videotaped will. Their journey in search of their true father takes them to the small, insular Danish island of Ork, where they stumble upon three additional half-brothers-each also sporting hereditary harelips and lunatic tendencies-living in a dilapidated mansion overrun by barn animals. Initially unwelcome by their newfound kin, the two visitors stubbornly wear them down until they're reluctantly invited to stay. As the misfit bunch get to know each other, they unwittingly uncover a deep family secret that ultimately binds them together. This inventively bizarre and outlandish comedy is directed by acclaimed, Oscar (R)-winning director Anders Thomas Jensen and also stars David Dencik (The Girl With The Dragon Tattoo.)

The Huntsman: Winter’s War Gets A Chilly Reception

Anders Thomas Jensen is one of Denmark's most fêted film-makers, the winner of two Oscars and a man with a knack for twisted comedies.

Like the mansion where most of the action unfolds, writer/director Anders Thomas Jensen's fourth feature brims with mutant creatures, bestial desires and warped family feelings.

A darkly comic dysfunctional family drama rather than the carnival of grotesquery it could have been.

The actors capture the boorishness and animalistic side of their characters, but also their vulnerability in the face of a world that makes such little sense to them.

Hilarious in places, hideous in others, this struggles to make its philosophical case. But the performances are exceptional and the conceit could not be more daring or distinctive.

Jensen and his game cast (especially Mikkelsen, who's hard to recognize at points) make it work too, and turn Men & Chicken into a film that's just as strange as it is entertaining.

Somewhat front-heavy, the twisted and demented Men and Chicken starts as a broad screwball comedy yet ends as a sobering and existential study of fraternity.

Nick Evan-Cook
One Room With A View

The effect of a carefully calculated balance is that Men & Chicken unfolds to become more complex than it at first appears.

It's a warped comedy about genetics, a slapstick farce, an existential enquiry, and it's likely to be a cult movie.

Sweet, funny, strange, and heartfelt, it is an outright great film that your friends will likely hate you for recommending.

If you stick around for the ride, it's provocative, fantastical, and disturbingly funny.

A bit of a sci-fi family drama as two entirely different adopted brothers look for and find the old familial stomping grounds ... only to be faced with the ugly reality that its not quite up to expectations. Late in the film we all discover the reason why, but not before the brothers are faced not only with their differences but with bonding in spite of them. There's heart in this mess, which may be the point of all families, eh?

Mads Mikkelsen is priceless - and nearly unrecognizable with a cleft lip, fake teeth and an eccentric composition - in this hilarious comedy that feels like a darkly humored mix of The Island of Dr. Moreau and The Texas Chainsaw Massacre, but the ending feels a bit off.