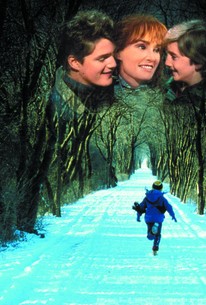 Weighed down by her late husband's debts, widow Beth Macauley (Jessica Lange) is compelled to sell her home and move to a less costly locale. She relocates in Baltimore with her resentful sons Chris (Chris O'Donnell) and Matt (Charlie Korsmo) and takes a job at a ramshackle gourmet food store managed by Lisa Coleman (Kathy Bates). Men Don't Leave offers in Beth an extremely vulnerable, easily discouraged person who can't seem to get a grip on her reduced circumstances. Even so, she and her sons eventually pull themselves together, despite many side trips with Wrong Lovers and False Friends. Some of the film's best moments involve Joan Cusack, playing a mixed-up nurse with whom Chris falls in love. Representing the comeback of director Paul Brickman after a seven-year gap, Men Don't Leave is a slightly more upbeat American version of the French film La Vie Continue. ~ Hal Erickson, Rovi

Men Don't Leave is the story of how a warm and believable suburban wife and mother becomes a widow who is trapped in a series of Hollywood improbabilities.

Performances to die for

Watching the suffering, growth, and personal renewal of these likeable characters we gain a fresh perspective on our primal feelings about the family circle.

O'Donnell impresses but, surprisingly enough, Lange drags things down to a place where only a formula finish can end things without the audience throwing fruit.

One of the most unjustly underappreciated films of the 1990s; wonderfully acted

If you like family drama, watch 'Men Don't Leave'. A family is thrown into turmoil when the husband dies unexpectedly. In an effort to deal with their circumstances, Beth and her sons find different supports, but eventually find out that family is needed to pull themselves together.