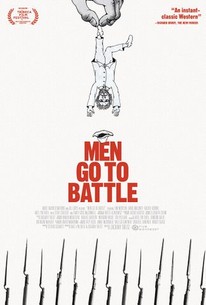 Most Americans predict that the Civil War will end by Christmas, but Henry and Francis Mellon couldn't care less. Bracing for another winter on their struggling farm in rural Kentucky, the brothers have become suffocatingly close. Francis' practical jokes become more and more aggressive until the night he accidentally injures Henry in a drunken fight. After humiliating himself in front of a daughter of the town's preeminent family, Henry disappears in the night. Months later, Francis learns that Henry has joined the Union army, and the two are left to find out separately what the approaching war will bring. 98m.

Kaiden Scott
as Boy at the Stir Off
View All

The Secret Life of Pets Is Funny and Colorful

As with other mumblecore projects, the plot is secondary to mood, naturalism, and the relationship between the two protagonists, but in this historical context that approach is more of a frustration than a virtue.

"Men Go to Battle" isn't always effective, in that way DIY filmmaking sometimes irritates by deliberately avoiding "moments." But as an offbeat lens through which to view an oft-mined era, it has a quiet pull.

The result is an odd but invigorating movie, and an intoxicatingly gutsy and personal take on historical fiction.

The acting here, like too much of the film, ends up registering as unfortunately amateurish.

Hard not to admire its existence. Equally hard not to wish it was more daring.

Striking in its evocation of a demanding time and place, this intimate drama about individual and national transformation heralds the arrival of an arresting new filmmaking voice ...

This deadpan dramedy plays now as what it was destined to become - a one-off stab at doing something different by a director/co-writer trying and failing to make his big break.

[It] looks and feels very real. There is not a moment in this film that breaks the illusion of the material reality of its period (the middle of the 19th century) and location (Kentucky).

Light on plot and heavy on reflective imagery, the film operates as a restrained comedy, complete with the rhythms of a certain brand of American indie cinema, but not beholden to its tropes or clichés.

The hyperlocal Men Go to Battle-a microbudget affair to which critics have justly applied the adjective "resourceful" ever since its premiere at Tribeca last spring-also has subtler ways of imbuing the historical past with a sense of immediacy.

America was very different 150 years ago than it is now, and the filmmakers capture that well. They just do not do it under the microscope of the Civil War anywhere near as thoroughly as they had the opportunity or the foundation to.

Deep down it's not about authenticity so much as how time stomps on us all, and how major historical events occur outside of our perception.

There are no featured audience reviews yet. Click the link below to see what others say about Men Go To Battle!