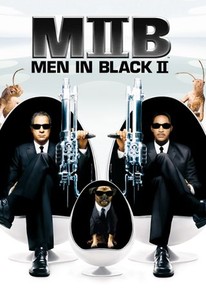 Critics Consensus: Lacking the freshness of the first movie, MIB 2 recycles elements from its predecessor with mixed results.

Critics Consensus: Lacking the freshness of the first movie, MIB 2 recycles elements from its predecessor with mixed results.

Critic Consensus: Lacking the freshness of the first movie, MIB 2 recycles elements from its predecessor with mixed results.

Otherworldly villains are on the loose again, and it's up to Earth's interstellar police force to bring them to justice in this sequel to the sci-fi comedy blockbuster Men in Black. Agent Jay (Will Smith) has become a high-ranking member of the Men in Black, the secret government task force designed to deal with unruly visitors from other worlds, while his former cohort, Agent Kay (Tommy Lee Jones), had his memory wiped clean and now lives a simple but contented life as a mailman. However, an especially nasty alien threat has reared its not-so-ugly head; Serleena (Lara Flynn Boyle) is a shape-shifting Kylothian alien who is in pursuit of another escaped visitor who holds the key to powers that would allow her to destroy the world. Making Serleena all the more dangerous is the fact she's taken on the appearance of a lingerie model, making her irresistible to most men. When the rampaging Serleena takes control of the MIB offices, Jay is forced to turn to the only man who can help him save the world -- the former Agent Kay. After restoring Kay's memory, the two remaining Men in Black set out to conquer Serleena with a motley band of friendly aliens, including a handful of worm creatures and a talking dog named Frank (voice of Tim Blaney). Jay, meanwhile, has his head turned by Laura (Rosario Dawson), an attractive waitress who was an unwitting witness to an alien attack. Men in Black 2 also features Rip Torn, Tony Shalhoub, David Cross, Patrick Warburton, and Johnny Knoxville. ~ Mark Deming, Rovi

Will Smith
as Agent J

Michael Rivkin
as Man With Dog

Peter Graves
as Himself

Richard Pearson
as Gordy
View All

New on Netflix October 2019
Men In Black Reboots As A Trilogy Without Will Smith, Sicario Gets a Sequel, and More Movie News
Comic Book Movies You Can Watch Online

There are just enough fresh, funny gags and witty throwaways to keep the 88-minute "MIB2" percolating.

Crazy creatures, some scares, and loads of fun.

The down-home satire of how we cope with cultural difference has evaporated, replaced by jazzy effects that wear out their welcome by the halfway mark.

Strange, zany, generally amusing and very likeable without actually being all that hilarious or surprising.

A mixed bag of a comedy that can't really be described as out of this world.

Odd grotesqueries that seem ill-fitted for a comical adventure compose much of the character designs, weakening the impact of events and the likeliness of being memorable.

And film afficionados everywhere will not be lost on some inside jokes and cameos- the funniest of which revolves around some cheesy special effects with wires and tin foil which has Agent Jay commenting that it 'looks like Spielberg's work'.

Men in Black 2 unfortunately suffers at the core as the sequel just doesn't quite have the same magic as its predecessor.

﻿Time passes, hope sinks and a theme emerges, unfortunately. Men in Black II shows that only two kinds of women exist on other planets: shining saints and snaky monsters.

It can't be said enough how much Smith's charisma and Jones' deadpan delivery almost save this movie and it's to their credit that this movie isn't as bad as it should be.

In the absence of the first film's rhythm, wit, and novelty, it's a typically lazy, diminishing-returns sequel.

Tommy Lee Jones & Will Smith give great performances, but it is not enough to grasp the attention of its audience as it fails to garner the touch from its predecessor. Men in Black II lacks the originality and goes excessively in too deep on its already familiar settlement. 2/5

Once again aliens with a malevolent agenda are running loose on Earth, and the only hope for stopping them lies in the hands of the Men in Black in this sequel to the 1997 hit. Yeah, the effects are once again top notch, and the performances from Smith and Jones ultimately save things, but overall, this sequel is a real disappointment. For one thing, it just feels really uninspired, and doesn't have the level of engagement as the first one. It's also rather lazy, extremely hit and miss with the humor (mostly miss), and criminally short where the run time is concerned. Sure, it does have it's moments, and it's not a bore when it comes to entertainment, but nothing is really done to make the audience really care. This film easily comes off as a typical sequel summer cash in event, and that's a shame. It's really too bad they didn't take more time to craft something worthwhile instead of ending up with some quite lackluster and dull.

'Men in Black II' feels a lot less original compared to its original. This could have been a new, clever chapter for both Kay and Jay. Instead, it feels like the original story, but its lost its punch and humor.

[img]http://images.rottentomatoes.com/images/user/icons/icon13.gif[/img] It's pretty much the same, so much that it's near enough a clone of the original. And yet it isn't as funny the second time around. Men in Black II is heavier on action but has almost no laughs or charisma, and relies primarily on the formula of the first film and the chemistry between Smith and Jones and consequently, it's to frightened to try anything different. It's quite simply the perfect example of an awaited sequel that turns out to be a dissapointment.