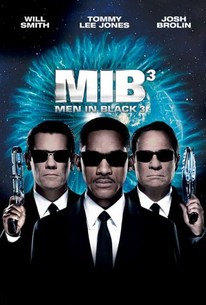 Critics Consensus: It isn't exactly a persuasive argument for the continuation of the franchise, but Men in Black III is better than its predecessor and manages to exceed expectations.

Critics Consensus: It isn't exactly a persuasive argument for the continuation of the franchise, but Men in Black III is better than its predecessor and manages to exceed expectations.

Critic Consensus: It isn't exactly a persuasive argument for the continuation of the franchise, but Men in Black III is better than its predecessor and manages to exceed expectations.

In Men in Black 3, Agents J (Will Smith) and K (Tommy Lee Jones) are back...in time. J has seen some inexplicable things in his 15 years with the Men in Black, but nothing, not even aliens, perplexes him as much as his wry, reticent partner. But when K's life and the fate of the planet are put at stake, Agent J will have to travel back in time to put things right. J discovers that there are secrets to the universe that K never told him -- secrets that will reveal themselves as he teams up with the young Agent K (Josh Brolin) to save his partner, the agency, and the future of humankind. -- (C) Sony

Will Smith
as J, Agent J

Jemaine Clement
as Boris the Animal

Joel Brady
as 1969 Man in Elevator

David Pittu
as Roman The Fabulist

Carl Johnson
as Worm
View All

Men In Black Reboots As A Trilogy Without Will Smith, Sicario Gets a Sequel, and More Movie News
Will Smith’s 10 Best Movies
Comic Book Movies You Can Watch Online

MIB3 is entertaining but forgettable, even without a neuralizer!

Let's give Smith, Jones and Sonnefeld a pass for going back to the well one too many times. But if they go for a MIB4, the pity party is over.

While it's a little thrown together, "Men in Black 3" seems focused on recapturing not just the style but also the soul of the original.

The script was enough of a mess to stop the shooting for high-priced rewrites, but you know what they say about washing garbage.

The third time is supposed to be the charm, right?

The movie represents at least a partial return to form--not as inventive as the first, but surely better than the recycled materials that made up the second.

Missed opportunities abound, especially considering the potential of the time period, the historic events, and the two agents meeting again for the first time.

It's hard not to be just a tad disappointed with a film that contains this much star power and still only manages to be modestly amusing.

A redundant take on the formula, it still skates by on Will Smith's charm.

I enjoyed Men In Black III for its fast-paced sequences, for its entertaining plot, and for the brilliant portrayal of Josh Brolin, who, in my opinion, is the one who brings to life an endangered franchise. [Full review in Spanish]

Director Barry Sonnenfeld has made MiB3 a colourful film, but with Danny Elfman's mismatched trademark gothic soundtrack, it seems to stay in the past and fail to bring in that much-needed vibrancy this film needed.

Debbie Lynn Elias
Behind The Lens
View All Critic Reviews (251)

MIB3 takes place 14 years after the events of the first film and history has been altered by an escaped convict captured by agent K (Tommy Lee Jones) who went back in time and killed agent K in the past when he "attempted" to capture him. Agent J (Will Smith) is now going back in time to try and save K from being killed by this said alien. Like with the other 2 MIB films, the films have extremely good CG and the designs of the aliens all look incredibly interesting and innovative and this movie is no exception in fact these aliens I think look the best out of the past aliens in the other two films. Mainly the main villain Boris the animal, mainly due to the fact that you get little glimpses of what he can do and some little hints of his true form but you never see him in his true alien form until the last 20 minutes and its only for a few seconds. The main thing where this movie shines is in the acting. The acting compared to the other movies is incredibly well done and probably the best acting i've seen in a while in a film. The character interactions with J and the young K (Josh Brolin) is just hysterical and the two both work off each other very well in moving the plot along and are both just flat out entertaining to watch interact with each other and the other characters. Also Boris the animal is a very, very intimidating villain and my favorite of the villains in the three films. The sheer anger and enjoyment that is shown in this performance is just incredible and he is much more developed villain rather than in the second film or the villain in the first film who were majorly underdeveloped in my mind and just not that interesting. Sure they were intimating but they were never really interesting villains and were just there for the sake of being the villain. One performance that I really enjoyed though being only in the movie for only about 5 minutes was Bill Hader as Andy Warhol AKA Agent W. This performance, though very short is just flat out hilarious mainly due to how he interacts with Will Smiths character and how he hates his guts so much and how well he pulls off Andy Warhol so well and shifting from calm and cool to just a flat out dick in every sense of the word. Overall MIB3 is a major improvement over the second film and to me is the best of the three films and yes I enjoy the first film but nowhere near as much as the third film. Its well acted, has a fantastic plot and has some great effects. Final rating 4*S out of 5

An enjoyable but forgettable sequel that doesn't bring anything new to the series. This time we don't have so much of that onscreen chemistry between Smith and Jones (who is absent during most of the film), but Brolin steals the show as a younger version of Jones.

The unlikely buddy cop team up of urban, hip, black guy with redneck, common sense, good ol' boy (does this conceit still carry currency? you betcha ... so much for the 21st century ushering in dynamic social change) returns to seduce you to pony over more popcorn money as the time travel card is laid out to spice up the old aliens among us formula. Luckily the stars bring the charm to keep sleep away while the hoary old chestnut is pranced about. And guess how it ends? They really like each other after all. More popcorn please.

I have to admit that I was never much of a fan of this franchise, feeling that it relied too much on special effects and a one trick pony gimmick. However, this 3rd installment tickled my funny bone, and while not perfect (some rather awkward moments to be sure), this one delivered the goods in a sort of offbeat, Twin Peaks sorta way (homage to the pie). I thought that the time travel aspect of the film was serviceable and capably handled, and the entire enterprise has a certain gleam in its eye, managing to straddle the fence between farce and realism. The two stars work well together and Josh Brolin is just fine as the younger Tommy Lee Jones. I'm not going to reveal much of the plot, other than to say that an arch villain has escaped from maximum security (a very nice beginning sequence) and gets access to a time machine, where he intends to go back to 1969 and warn his younger self that Jones is after him. As the two MIB hunt down clues to the villain's whereabouts in both present and past, we are led into several set pieces that range from mildly funny to hilarious - like a confrontation and shootout in a Chinese Restaurant. There's also a funny touch when a femme fatale brings a cake to the prison - said cake is wobbling, while her abundant cleavage is not - gotta love it! Back in time they meet up with Andy Warhol - a scene that could use some salt, but paves the way to a meeting with a creature who can see a myriad of alternate realities. This leads to some truly funny and yet heartfelt moments, as this character holds the soul of the film and allows Jones and Will Smith the opportunity to do some male bonding that otherwise wouldn't play true to the characters. At film's end when Jones states in his usual flat tone "it was an honor", the words carry so much more than a film of this type has a right to expect - and yet it rings true and poignant; to be followed by a bit of hip levity that you'd expect from the brand, and yet was so sorely lacking in the 2nd installment.