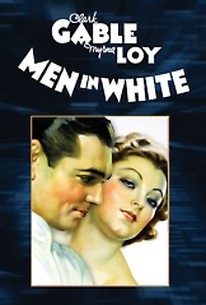 In this film, Dr. George Ferguson is a dynamic young intern whose brilliant future seems assured. Ferguson is slated for a socially-prestigious marriage to wealthy Laura Hudson. However, when Laura begins expressing displeasure over Ferguson's dedication to his work, he enters into a brief affair with student nurse Barbara Dennin.

Henry B. Walthall
as Dr. McCabe

Don Douglas
as Mac
View All

Critic Reviews for Men in White

The Pulitzer Prize hospital play transferred with high success to the screen, thanks largely to Director Boleslavsky and his camera man.

There is a harrowing scene in the operating room which will leave you limp for the rest of the night.

Audience Reviews for Men in White

Interesting sets, blending high tech and art deco with an almost expressionist feel, are the highlight of 'Men in White'. Director Ryszard Boleslawski also uses shadows and some interesting framing to create a film that is often beautiful to watch. It's also interesting to see Clark Gable in the role of an up and coming doctor who finds himself pulled between his personal life (a fiancé, played by Myrna Loy) and his professional life (the desire to someday work for a renowned doctor, played by Jean Hersholt). The film spends quite a bit of time establishing the fact that he takes the job seriously, cares for his patients, and that the job requires a lot of sacrifice. Therein lies its main problem - it's more than a little heavy-handed in its "job or career" theme. It's based on a Pulitzer Prize winning play, but almost as if it were written as propaganda by someone in the medical field. When Myrna Loy dramatically proclaims "It's bigger than any of us...humanity" as she contemplates the importance of being a doctor, I laughed out loud, and not in a good way. I've seen Myrna in a lot of films, and that moment is the worst I've ever seen for her. It's not all bad, and the best line in the script is when Hersholt puts things in perspective, saying that doctors are still groping around with respect to their knowledge of the human body, but they're doing so more intelligently than twenty years ago, and in twenty more years their understanding will be better still. A very interesting part of the plot is when a young nurse (Elizabeth Allan) suddenly needs an operation herself - and we realize, without it being explicitly mentioned, that she attempted an abortion on her own. The restraint heightens the shock and drama, and I couldn't help but wonder how many women this happened to prior to abortion being legal. The Catholic Legion of Decency didn't want viewers to think about that, and put the film on their no-watch list. Unfortunately, it's handled melodramatically, including Loy ludicrously appearing in the operating room. The film appears to have just made it in just before the Hays Code was enforced, but the fact that it was looming also appears to have affected the story line in the adaptation of the play, which is unfortunate. There are some moments of levity in an otherwise heavy film. Young interns pursue women, scamper about in towels, and quip things like "That's the trouble with being in love - it kills your sex life!" I smirked as several times a characters says someone else needs a spanking when they're not cooperating, e.g. Loy to her father, the doctor to Loy, etc. Perhaps the funniest inappropriate line was from the lab technician, who raves in the presence of a man grieving over his wife's cancer, "Say, George, you know that Simpson gal down in X-ray? She was over at Fleischer's, table next to mine. Oh, she's luscious. Had on one of those dark tight silk things. Does she dress close to the skin. Boy, what a chassis. What a chassis." It's interesting to see "state of the art" medicine in 1934, the sets are very nice, and the film deserves a look for its star power and the reference to abortion. Just guard your expectations, as the plot is not very well developed, and the script is preachy.